Decongestion exercise begins ahead of Tamale overpass opening on Tuesday

Ahead of the inauguration of the Tamale overpass on Tuesday, March 29, 2022, the Tamale Metropolitan Assembly has embarked on a decongestion exercise within the central business district of the metropolis.

The exercise, led by the Metropolitan Chief Executive Officer and the assembly’s task force, removed some unapproved containers along the project site.

The Tamale project is one of the $1.5 billion roads infrastructure projects under the overall $2 billion Sinohydro Master Project barter Agreement between the government of Ghana and China.

The project, which began three years ago, is aimed at easing traffic congestion in the city. Currently, work is almost complete on the project.

As President Nana Akufo-Addo prepares to inaugurate the project on Tuesday, authorities have embarked on a decongestion exercise in the township. 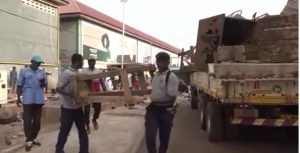 Speaking to the media after the exercise, the Metropolitan Chief Executive Officer, Sule Salifu, warned businesses operating along the shoulders of the street to desist from that, and called on traditional authorities to support the efforts of the assembly in keeping the city clean.

“We want to thank our chiefs for the support they offered us during the decongestion exercise the task force embarked on along the interchange enclave. We know that the people will run to them when the Assembly is undertaking such exercises, we want them to stand firm and support the Assembly and the government because the beauty the government is bringing to Tamale must be sustained.”

“We also want to tell the traders to desist from selling around the interchange, we have told the police and the task force to arrest anyone who flouts these instructions. They will be convicted and prosecuted.”

The Tamale Interchange began on April 10, 2022 as part of the $1.5 billion roads infrastructure project under the Sinohydro Master Project Agreement.

The Master Project Support was agreed upon between Ghana and Sinohydro Corporation Limited in 2018 to address major infrastructure challenges in the country.