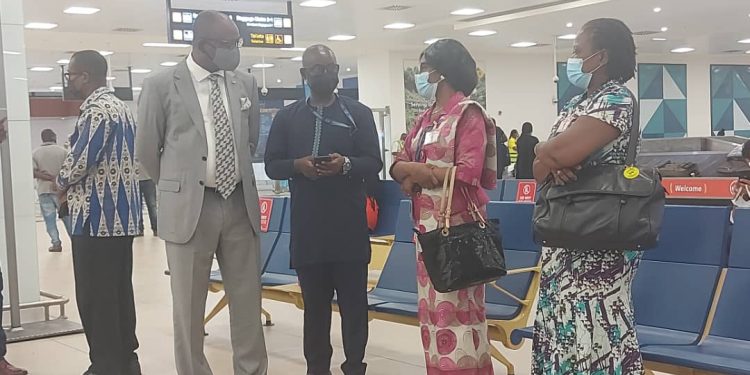 The government of Ghana has reached an agreement with the Russian government to allow for the safe passage of Ghanaians, particularly students, who are in the concentrated zones of the ongoing war.

The government has been having a hard time evacuating students from cities such as Sumy and Kharkiv who can’t have access to transport to other neighboring countries due to the intensity of the fight in those areas.

This was made known by the Deputy Minister of Foreign Affairs, Kwaku Ampratwum-Sarpong, when he received an additional 24 Ghanaian students who fled the war in Ukraine.

“As of this morning, after lobbying the Russian authorities and President, President Putin has finally said they will open a safe passage for citizens caught in Kharkiv and other areas and that will start immediately. The Red Cross has also agreed to participate in the exercise of evacuating our citizens caught up in Kharkiv.”

Meanwhile, the government says the Hungarian government has agreed to allow affected Ghanaian students to continue their education in selected universities.

“The government of Hungary has  agreed to take those who will be prepared to transfer to universities or to continue education in Hungary, and they are prepared to match whatever facilities, whatever financial obligations being paid in Hungary, so there is a window of opportunity that all is not lost.”

The government says the Ghana Psychology Council has also been engaged to provide psychological support to Ghanaian students who have returned from Ukraine.

The students have expressed gratitude to the government for facilitating their movement out of Ukraine as they recounted their experiences with racism at the borders.

The leader of the 24 students who arrived from Poland today, Friday, Adu-Gyamfi Amobi, said, “We want to thank God because he helped us move. It is not our strength. What was going on at the border was not easy. People were lying down on the floor. It was a traumatic experience. I am happy that the government stepped in to help.”

Ghana has been mainly concerned with the plight of students who were in Ukraine when it was invaded by Russia.

Seventeen Ghanaians who were evacuated from Ukraine touched down at the Kotoka International Airport on Tuesday morning before the 24 that arrived today, Friday, March 4, 2022.