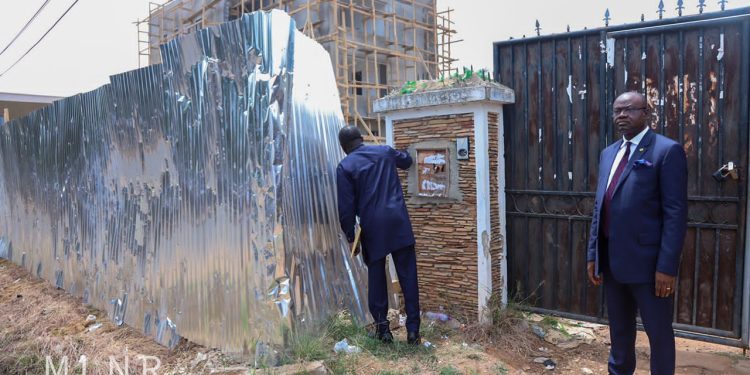 The Ministry of Lands and Natural Resources has instructed private developers working on the Bulgarian Embassy land in Accra to immediately stop work.

During a working visit to the area on Thursday, March 17, 2022, the Deputy Lands and Natural Resources Minister in Charge of Land and Forestry, Benito Owusu-Bio, indicated that work must stop for the outstanding dispute to be resolved.

“They are not law-abiding people, they are not obeying the rules, and the Lands Commission has that right to stop you from working. This is an indication to the world that we from the Lands Ministry have been here and are asking whoever is building this structure to stop work while investigations go on. Should they have any issue with that, they should come to the Ministry.”

The Bulgarian Ambassador to Ghana and Nigeria, Yanko Yordanov, has accused the Ghanaian government of breaching the Vienna Convention on Diplomatic Relations.

He warned of far-reaching implications on diplomatic relationships with Ghana due to the demolition of a facility on the premises of its Embassy in Accra.

The Vienna Convention on Diplomatic Relations of 1961 is an international treaty that defines a framework for diplomatic relations between independent countries.

The Bulgarian Embassy, located at Kakramadu Road, Plot No. 10, East Cantonments in Accra, was demolished by a private developer in 2017.

Yanko Yordanov, who is worried about the turn of events, called on the government of Ghana to as a matter of urgency ensure that the protocols of the Vienna Convention on Diplomatic Relations are respected.

He said he had held discussions with President Akufo-Addo on the matter.

“He [President Akufo-Addo] assured me that this will be resolved very soon, but our expectations didn’t match the reality at all and for this reason, we are still insisting on the implementation of the Vienna Convention which must be done in a very proper way.”

Our officers not killing residents in Bawku; disregard such claims – Ghana Armed Forces

Our officers not killing residents in Bawku; disregard such claims - Ghana Armed Forces