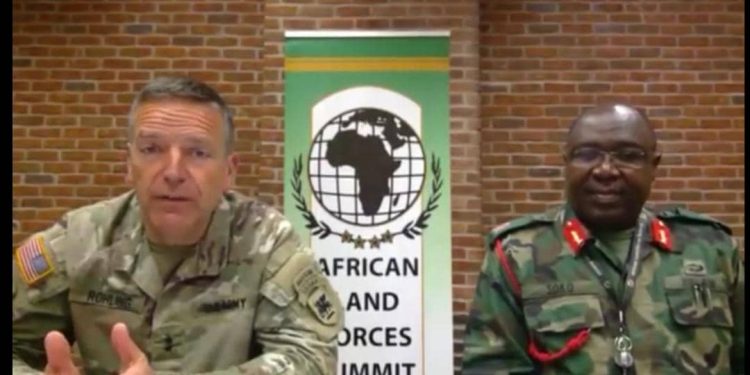 He stated that, the United States Africa Command, (AFRICOM) and the Southern European task force are thus key in addressing the menace.

According to Major General Rohling, AFRICOM has over the years helped African countries train and improve the capacity of their military.

“I think that is the introduction of our security force assistance battalions and brigade across several countries in Africa where small groups of Americans have gone to African countries and in accordance with that country’s desires and requirements, helped train with and for that country to improve the capacity and capability of their military”, he said.

He said this in a press briefing on the sidelines of the just-ended African Land Forces Summit, which took place at the Fort Benning in the US, in Georgia state.

The Summit, which was aimed at strengthening partnerships across Africa to improve regional and continent-wide security, was on the theme “Resilient Institutions Build Resilient Leaders”.

It offered participating countries the opportunity to discuss and share ideas on strategy and best approach in tackling the incessant security threats in Africa.

The Land Forces Commander for the Republic of Malawi, Chikunkha Harrison Soko who also joined the media call to address journalists, said the venue for the summit, was an eye-opener to other Generals to learn and experience from their European allies.

“We are here at Fort Benning; for me, it’s not new, but for some of the generals who have never been here, I think they have seen the soldiers coming in for training, straight from recruitment, that is, and then they have seen the progressive courses both for non-commissioned officers and for the officers. So it can’t – this summit cannot be in a better place than Fort Benning. It has got a long history, and the – it’s perfect that we should be here”, he stated.

Security collaboration between Africa and Europe has been a top priority in addressing transnational security.

Hence, there is the need for partners to come together and identify practicable measures to come to grips with the insecurity challenges.