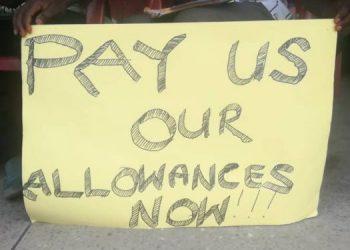 Some personnel of the Youth in Afforestation program say the Green Ghana project will fail if the government does not pay their three-month arrears owed them.

Last month the group protested over their allowances, which had been in arrears for five months, prompting authorities to make two months payments.

But the group say they now want the government to speed up processes to clear the remaining three-month arrears before the Green Ghana project in June 2022.

The convener of the group, Bossman Adu-Twum Anin, said they will withdraw their services if they are not paid before the exercise.

“We are expecting the December pay and those who had issues with their October stipends must also be paid. Also, the January and February 2022 allowances too, we expect the Forestry Commission and the Minister for Lands ad Natural resources to make sure that our payments are done before the start of the Green Ghana project. We are reminding them that they still owe us, and they have to fulfil their obligations, but if they fail to do so, before the Green Ghana project, it means it will not be successful. They need to settle us before we all hit the ground for the Green Ghana project,” he warned.

The Green Ghana project was launched by government with the aim of restoring the forest cover of the country.

The government is hoping to plant 20 million trees this year through the project.

President Akufo-Addo while speaking at the launch of the 2022 Green Ghana Day on Tuesday, March 1, 2022, called on all citizens to support the cause.

“It is for this reason we launched the Green Ghana Project last year as part of an aggressive afforestation and reforestation programme. With your support and enthusiasm, we exceeded our target of 5 million to 7 million trees on the maiden launch. This encouraged us to even do more. I am informed that all these trees are doing well,” he said.