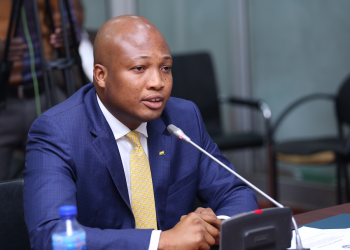 North Tongu Member of Parliament, Samuel Okudzeto Ablakwa, has alleged in a Facebook post that President Nana Akufo-Addo has returned to renting the $18,000 an hour ultra-luxury executive jet for his trip to the United States and London.

The MP says so far, the president has accumulated a bill of $465,000 equivalent to 3.5million Ghana cedis using current rates.

On the last trip the president embarked on to Dubai for the Dubai Expo, the president flew on a commercial flight attracting commendation from Okudzeto Ablakwa.

The president was in the US to deliver his keynote address at this year’s International Leadership Summit on Friday, and he is currently in the UK to launch one of the government’s flagship programs, Destination Ghana.

In a Facebook post, the lawmaker condemned the president’s decision to return to the use of a chartered flight.

“President Akufo-Addo couldn’t wait to fly his favourite US$18,000 an hour LX-DIO from Washington where he departed at 10:13 am and arrived at the Charlotte Douglas International Airport in North Carolina at 11:22 am — a flight time of 01:09. It is important to acknowledge that there were more than a dozen available commercial flights with business class tickets not exceeding $700 in value.”

According to the North Tongu MP, the President kept the LX-DIO with him as he addressed Bishop T.D. Jakes’ summit and then flew aboard the same extravagant jet on Saturday, the 2nd of April, 2022 at 9:28 am US time and arriving at the London Stansted Airport at 9:40 pm UK time. A flight time of some 7 hours and 54 minutes.

“At this point, it is unclear if the President will return to Ghana with the LX-DIO on Wednesday or if he would stick to the new deceptive strategy of being seen in the Ghanaian jurisdiction aboard commercial flights while hiding his elaborate chartered arrangements from the prying Ghanaian public.”

He noted that so far, the Ghanaian taxpayer must cough up an astronomical US$465,000 in luxury rental charges.

“At the current exchange, that is a scary GHS3,505,515.49. This will mean that since May last year, the Ghanaian taxpayer has spent at least GHS28.5million on President Akufo-Addo’s ostentatious travels.”

“How duplicitous is that for a government that claims to be cutting expenditure drastically in the wake of widespread excruciating hardships and economic mismanagement, and yet our President has the conscience to spend a whopping 3.5million Ghana Cedis attending a church service and a fanciful tourism event in London?”

He wondered how the President can enforce his recent ban on some ministerial international travels this way.

“Be assured, this latest “meet-me-there-strategy” shall be vigorously exposed and defeated. Our tracking continues; we shall keep you updated,” he added.