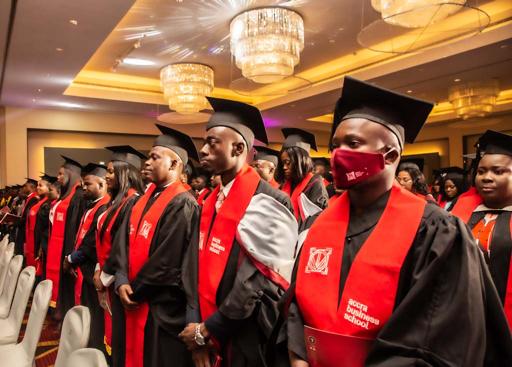 A Member of the Governing Council of the Accra Business School (ABS), Professor Samuel Nii Odai, has urged graduates to make good use of the digital economy to make a difference in society.

He said this during the 12th congregation of ABS where 329 students were awarded various degrees including Master of Business Administration (MBA), Master of Science Accounting and Finance, Bachelor of Science Administration, as well as UK Level 6 and 7 Extended Diploma.

Speaking at the convocation, themed: “Entrepreneurship and the Digital Economy: Challenges and Opportunities”, Prof. Nii Odai who doubles as the Vice Chancellor of Accra Technical University, said graduates ought to capitalize on the fast-growing digital space to make an impact on Ghana’s economy.

He congratulated students for the successful completion of their respective courses, having urged them to trigger the needed transformation in the world of work with the education and training they had received.

“The present generation has been born into an era of technology and I would urge you to take advantage of the digital economy considering the training you have received from the school”.

Prof. Nii Odai noted that the era of innovation had not ended despite the ease of COVID-19 restrictions, having said that digitization was here to support entrepreneurship.

Vice President Dr Mahamudu Bawumia in a speech read on his behalf by Prof. Mohammed Salifu, congratulated the graduands for their milestone and appreciated the efforts of ABS management in producing graduates who are contributing to human capital and national development.

He said the theme of the congregation was apt as this time of the economy where they sought to create opportunities for all, reaffirming their belief in private sector-led economic development.

“The government’s economic policy and strategy across key industries had been underpinned by promoting a focus on entrepreneurship and building a digital economy, which are critical elements for economic and social development”.

“The subject for today is therefore unavoidable if we seek to move Ghana from the periphery to the virtual centre of emerging private sector-led activities. This is very important as we strive to change the structure of Ghana’s economy through diversification and to position ourselves as one of the fastest-growing countries in Sub-Saharan Africa.”

The Vice President urged graduates to follow their dreams and capitalize on various entrepreneurial opportunities in contributing their quota to the economic development of the country.

According to him, the programme was a diversification of the school’s discipline which would take effect from September 2022 when three degree/postgraduate courses in Computer Science would be offered from the Institute of Technology Carlow in Ireland.

“We decided to collaborate with the Institute of Technology Carlow in Ireland to launch these three powerful Computer Science programmes.”

“The programme is aimed at assisting the government to grow the digital economy of the country and we believe that for our digital initiative to become successful we need well-educated IT personnel. This is another strategic aspect of our strategy to strengthen the international credentials of ABS by enabling Ghanaian students to secure globally recognised degrees from the UK, Ireland, among others,”
Madam Nana Ama Xorse was adjudged the Overall Best Student (MSc) having received the Valedictorian Award.

Police investigate circumstances surrounding the death of 2 persons in Akatsi

D+ Keteke, Y Clash of The DJs to rock Takoradi

D+ Keteke, Y Clash of The DJs to rock Takoradi