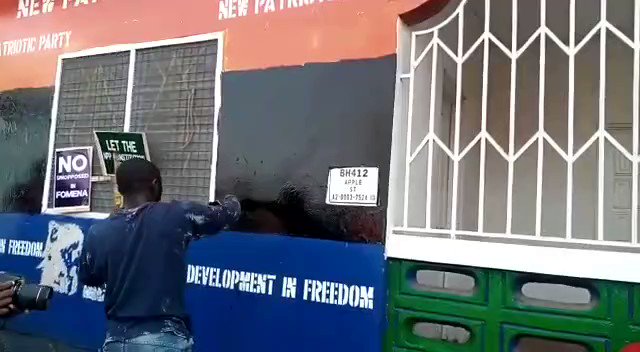 The Bekwai Circuit Court in the Ashanti Region has issued a bench warrant for the immediate arrest of four persons who led a protest and painted the New Patriotic Party’s office in the Fomena Constituency in the colours of the opposition NDC.

The four; Isaac Agyei, Gilbert Oppong Akwasi, Micheal Ankapong, and Silas Yeboah, have been charged with causing unlawful damage, among others.

Aggrieved NPP members in the Fomena Constituency on March 7, 2022, during a protest, threatened to defect to the National Democratic Congress and painted the office in NDC colours.

They also pasted posters of former President John Dramani Mahama on the building after they alleged that the leadership of the NPP was planning to impose an independent candidate on them ahead of the 2024 general elections.

The presiding judge, His Honour Mark Diboro Tairima, expressed his disappointment about the posture of the accused persons and their lawyer.

The prosecution is hopeful the case will be settled on 28th April 2022, which is the next adjourned date.

Head of Legal and Prosecution at the Ashanti Regional Police Command, Chief Superintendent, Kofi Blagodzi, was also disappointed the four failed to show up in court.

“The party has set up an ADR mechanism to address issues bordering on the party. Some prominent people have been appointed to address these issues, so I do not know why they refused to show up in the court. However, this problem will be addressed.”

The protestors had vowed to resist attempts by the Independent Member of Parliament for the area, Andrew Amoako Asiamah, to be imposed on them in the next parliamentary election.

They alleged that the leadership of the party had begun some machinations to favour supporters of the independent MP as against those believed to be from other camps in the ongoing polling station elections.

A spokesperson for the aggrieved supporters of NPP in the Fomena Constituency, Emmanuel Domah, told Citi News their protest was a result of unfair treatment meted out to some party members by the party hierarchy.