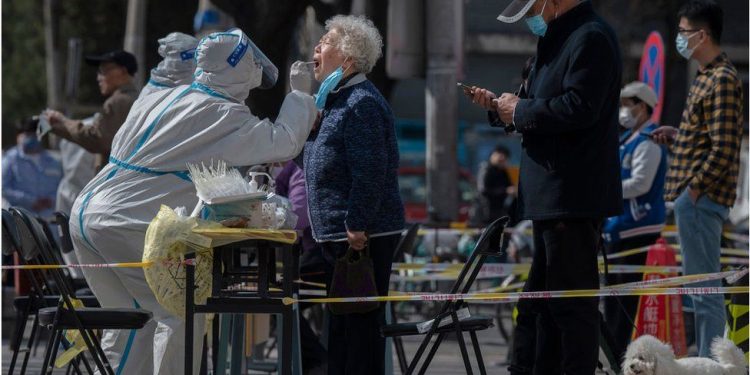 China has reported the deaths of three people from Covid in Shanghai for the first time since the financial hub entered lockdown in late March.

A release from the city health commission said the victims were aged between 89 and 91 and unvaccinated.

Shanghai officials said only 38% of residents over 60 are fully vaccinated.

The city is now due to enter another round of mass testing, which means a strict lockdown will continue into a fourth week for most residents.

Until now, China had maintained that no-one died of Covid in the city – a claim that has increasingly come into question.

Monday’s deaths were also the first Covid-linked fatalities to be officially acknowledged by authorities in the entire country since March 2020.

Firstly because, up to this point, it was a miraculous stretch of credulity to think that no-one in a city of almost 25 million people had succumbed to this wave of the virus.

But second, and more importantly, we know that people HAVE already died after contracting Covid in this outbreak. We have reported that.

It happened to dozens of elderly patients at a single hospital in Shanghai. But they were not official Covid deaths, according to the authorities. They died of underlying problems, apparently.

So what’s changed? The answer is nothing seems to have changed in terms of clinical assessments.

People with underlying health problems died after testing positive but the death rate remained at zero.

Now three people have died in very similar circumstances but the official death toll has increased.

It’s fair to ask – is this because the authorities have decided they need to make public the dangers of this vast wave of a virus against which barely half of China’s over 60’s are fully vaccinated?

Because up to now this was a virus that Shanghai’s authorities had warned could devastate the population – otherwise why else would they lock down the city – yet it hadn’t officially killed anyone.

In a statement announcing the deaths, Shanghai’s Health Commission said that the three people died in hospital on Sunday despite “full efforts to resuscitate them”.

It added that all three people had underlying health conditions.

Since the discovery of an Omicron-led outbreak three weeks ago, the city has been under strict lockdown, which has angered residents.

Millions have been confined to their homes, with anyone testing positive being sent to quarantine centres.

In recent weeks many have taken to social media to complain about the restrictions and the lack of food supplies.

People have had to order in food and water and wait for government drop-offs of vegetables, meat and eggs, and analysts say many are running low on supplies.

The lockdown extension has overwhelmed delivery services, grocery shop websites and even the distribution of government supplies.

But with more than 20,000 new cases a day, authorities are struggling. The city in recent weeks has converted exhibition halls and schools into quarantine centres, and set up makeshift hospitals.

The recent surge in cases in China, although small compared to some countries, is a significant challenge to China’s “zero-Covid” strategy, which uses swift lockdowns and aggressive restrictions to contain any outbreak.

The policy sets China apart from most other countries which are trying to live with the virus.

But the increased transmissibility and milder nature of the Omicron variant has led to questions over whether the current strategy is sustainable in the long run.