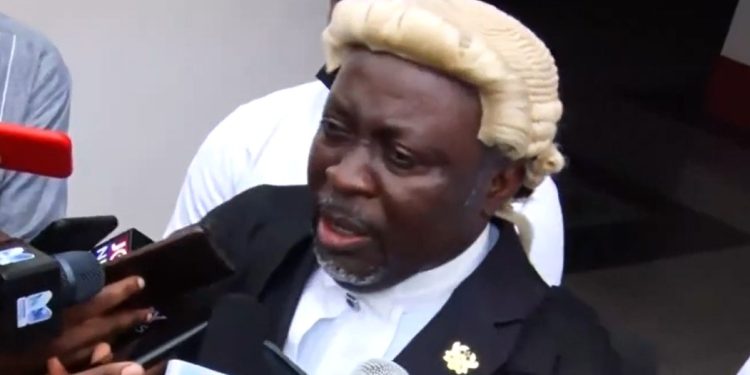 A member of James Gyakye Quayson’s legal team, Baba Jamal, says his side disagrees with the latest ruling of the Supreme Court on the Assin North Constituency election petition.

The Supreme Court on Wednesday, April 13, 2022, restrained Mr. Quayson from representing the people of Assin North until the final determination of a pending substantive case.

According to Mr. Jamal, the ruling of the Supreme Court will deprive the people of Assin North representation in Parliament.

“The Supreme Court has given its ruling, but we vehemently disagree with their position. It is a sad day for all of us. What it means is that Assin North is also not going to have representation in Parliament for as long as this case lasts. That is a sad situation.”

“There are precedents in this country. We all remember the case in Ayawaso West Wuogon where the lady was allowed to be in Parliament until the final determination of the case. So we thought that the Supreme Court would consider that situation and allow the representation to continue. But our legal team will meet and officially know the next step to take,” he said in an interview with the media shortly after the Supreme Court ruling.

Michael Ankomah-Nimfa, a resident of Assin Bereku in the Central Region, filed a petition at the Cape Coast High Court seeking to annul the declaration of Mr. Gyakye Quayson as the MP Assin North.

Mr. Ankomah-Ninfa had insisted that Mr. Quayson had dual citizenship prior to filing nominations to contest for the Assin North parliamentary seat during the 2020 polls.

The Cape Coast High Court subsequently declared the 2020 parliamentary election held in the Assin North Constituency as null and void, as it upheld that Mr. Quayson breached the provisions of the constitution with regard to dual citizenship.

Mr. Quayson subsequently appealed the judgment, at the Court of Appeal in Cape Coast, but the case was subsequently dismissed.

He again sought cover from the Supreme Court.

Michael Ankomah-Nimfah also filed the petition at the Supreme Court, seeking interpretation of Article 94(2)(a) of the Constitution.

He also filed a writ at the apex court to have Mr. Quayson prevented from carrying himself as the MP for Assin North until the final determination of the petition, a request upheld by the Supreme Court on April 13.

Prior to the ruling, Mr. Quayson had asked the apex court to declare the petition as frivolous, vexatious, and an abuse of court processes.