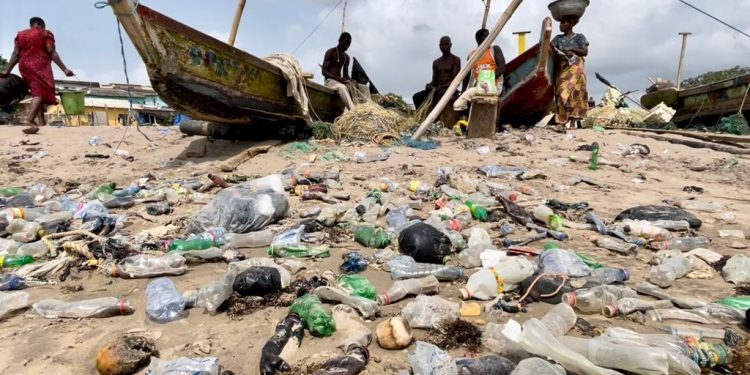 20 community volunteers selected from all seven Metropolitan, Municipal and District Assemblies in the Western Region have received training and startup capital from the Rollback Plastics Initiative to establish plastics collection centres in 20 communities of the region to help address plastic waste pollution.

The Rollback Plastics Initiative which is under the Community-Led Environment and Beach Improvement through Livelihood Empowerment project is being implemented by Opportunities Industrialisation Centre International (OICI) with support from TEN and Jubilee Partners.

The Project Manager of OIC International, George Dorgbetor, who is leading the implementation of the Rollback Plastics Initiative told Citi News the project is designed with the objective to reduce plastic waste in the environment and the ocean through a sustainable approach to creating awareness and value on plastic waste as a business for alternative livelihood for beneficiary communities.

He said despite carrying out several community and beach clean-up activities, plastic waste has been the major challenge in the project communities as the issue is just a sign of a nationwide and worldwide problem.

George Dorgbetor however highlighted what the Rollback Plastics initiative is doing to help address the concern.

“The project with support from the TEN and Jubilee Partners has trained and supported 20 community volunteers selected from all 7 MMDAs in the Western Region with startup capital, weighing scales and other items for record-keeping to establish Rollback Plastics collection centres in all the 20 communities. With its strategy, the Rollback Plastics initiative is expected to take between 8 and 10 metric tonnes of plastic waste from the environment and along the beach each month for recycling. The project will also collaborate with other partners in the plastic waste sector to organize plastic buyback events and raise awareness on the value of plastic waste as well as providing some incentives to hard-working community volunteers”, he added.

He further noted that the project has also developed a system to empower the volunteers with a savings culture so as to have access to loans from the Tullow Ghana Fishermen Anchor Support project.

The Rollback Plastics initiative has become necessary because the world of work and production is gravitating towards a circular economy with a focus on zero waste.

The initiative is part of the TEN and Jubilee Partners’ contribution to Ghana’s circular economy and to empowering community members along with the coastal communities with alternative livelihood support.