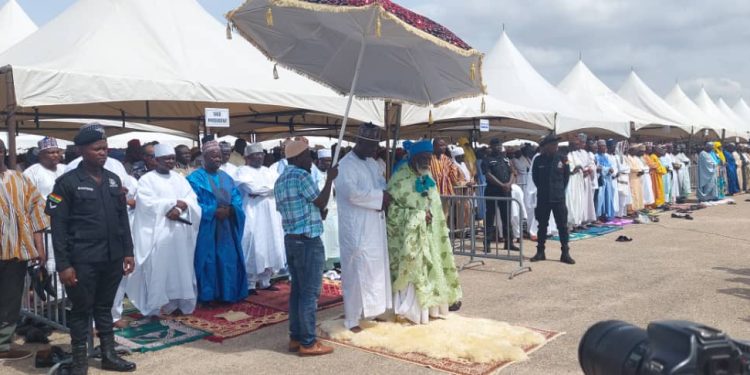 The Vice President, Dr. Mahamudu Bawumia, has assured the National Chief Imam and the Muslim community of government’s commitment to commence the model SHS schools in Zongo communities this year.

Addressing thousands of Muslims at the Independence Square to mark Eid prayers, he noted that, a number of projects are ongoing in Muslim communities in the area of health, and roads among others.

According to the Vice President, government is committed to ensuring that Muslim communities benefit from basic infrastructural development.

“The Zongo Development Fund has completed about 200 projects and commissioned many of them and many others will soon be commissioned. The construction of the model SHSs will start this year.”

The National Chief Imam led prayers and expressed his anticipation towards the government’s promise to build model schools in some Zongo communities across the country.

“The Chief Imam says he looks forward to the government’s intended model schools in the Zongo communities. The Chief Imam is waiting for the day when sword cutting will take place.”

Muslims across the country gathered at the Independence Square on Tuesday, May 2, 2022, to mark the end of the Holy month of Ramadan.

Eid al-Fitr, meaning ‘Festival of Breaking the Fast’, falls on the first day of Shawwal in the Islamic calendar.

However, this does not always fall on the same day, as the start of any lunar Hijri month varies based on when the new moon is sighted by local religious authorities.