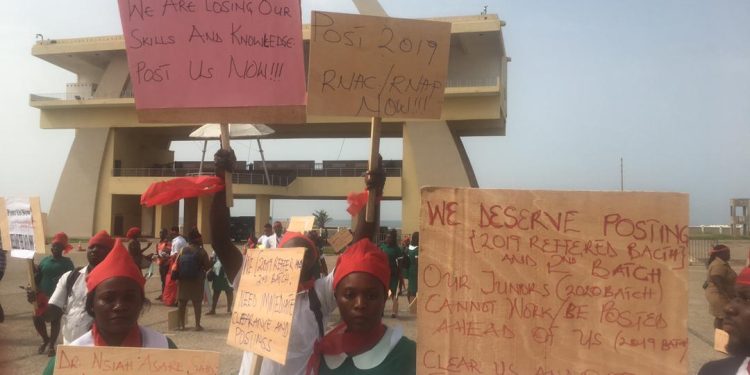 The Coalition of Registered Unemployed Nurses and Midwives Association say they are disappointed that after almost two weeks of petitioning the Ministry of Health, their concerns have not been addressed.

The group, on May 17, hit the streets to protest the government’s failure to give clearance to some of its members who completed school in 2019.

They also accused the Ministry of using a ‘backdoor approach’ in posting persons who completed school recently, leaving those who completed years ago.

In an interview with Citi News, one of the leaders of the Coalition of Registered Unemployed Nurses and Midwives Association, Charles Apandago, said the demonstration did not achieve its purpose.

“In fact, since we presented the petition to the Ministry, nothing much has been done. Yesterday, [Thursday] we made a follow-up to the Ministry and according to them, a committee has been set to look into the issue, and from what they are telling us, they do not have money now.”

“They only gave us the clearance because we wanted it, but for now, they don’t have money in their coffers, so they said we should give them more time. We are disappointed because things are not easy. We thought the demonstration could have done something for us, but it didn’t,” he added.

Meanwhile, the group has given a two-week ultimatum to the Ministry to meet thier demands.

“Right now, we are giving them two weeks and if they don’t do anything for us to be posted, then a huge demonstration will be held, and it won’t be a peaceful one,” Mr. Apandago said.

The group says the Ministry of Health and Finance granted financial clearance to the 2019 batch in October 2020, but excluded the referral nurses.

In October 2019, members of the association picketed at the Ministry of Health to demand immediate employment.