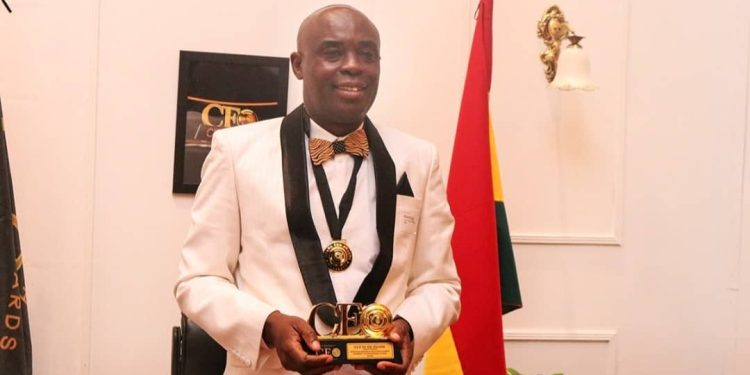 The Vice-Chancellor of the University of Professional Studies, Accra (UPSA), has been named among a group of leading CEOs who were honored at the inaugural 2022 Ghana CEO Awards.

The UPSA Vice-Chancellor, Prof. Abednego F.O. Amartey, was adjudged the CEO of the Year – Education in recognition of his stellar leadership at UPSA, where he continues to chart a bold and imaginative agenda for the accelerated growth and development of the university.

“Under his tenure, UPSA has witnessed meteoric improvements in key areas of infrastructure, teaching, and learning, and our international standing,” shared Prof. Charles Barnor, UPSAs Pro-Vice-Chancellor.

“His focus on positioning UPSA as a leading university has resulted in a more than 50% increase in our academic offerings, including three Ph.D. programs.

“The award encapsulates what his leadership style represents — a commitment to excellence. The university’s reputation A lot has been achieved by UPSA during his tenure including the continuing rise in the university reputation as evidenced in the coveted rankings in which we have been placed in recent times.”

On Saturday, May 1, the Vice-Chancellor was also honored by UPSA students.

He received an award and citation for his “outstanding leadership which has taken UPSA to the next level and pointed to his determination, focus, passion, and ambition as a source of inspiration to all students.”

EdTech Monday: When is the right time to introduce kids to technology for learning?

EdTech Monday: When is the right time to introduce kids to technology for learning?