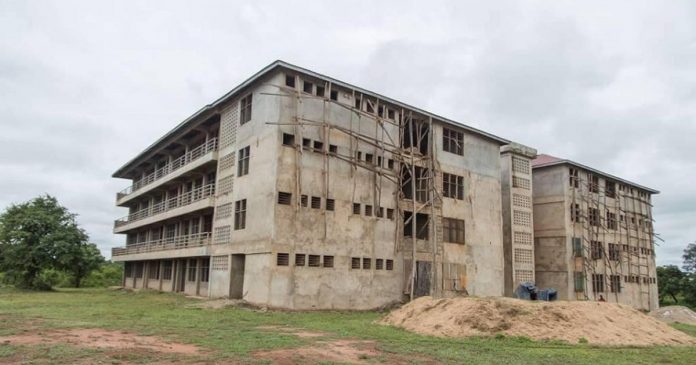 One of the uncompleted E-block proejcts

The Administrator of the Ghana Education Trust Fund (GETFund), Dr. Richard Boadu, says his outfit’s 3-year plan, which was recently approved by Parliament in April 2022, provides an opportunity for the completion of 20 E- Block schools by the end of this year.

Dr. Boadu, who made this revelation during a media interaction to discuss education infrastructure, indicated that the 20 E-Blocks were selected on the basis that they had all reached the benchmark of at least 70% completion.

He further explained that under the Nana Akufo-Addo administration, 14 of the E-blocks have been completed so far, adding that, with the additional 20 to come, the total number of completed E-Blocks by GETFund by the end of this year will be 34.

In addition to the 16 completed by World Bank, a total of 50 E-Blocks would be completed by the close of the year 2022.

Commenting on the delays to the project completion, the Administrator said that the contractors not being on site at present was not due to a lack of payment; rather the fluctuation clause in their contracts was not seen by many as fully compensatory.

Emphasising this point, Dr. Boadu noted that “Take for instance a contractor who was awarded an E-Block project in 2013 or 2014 at say GH¢10 million. Five to six years down the line, the contract sum has clearly lost its value because of currency depression, interest rate and inflation, among others.”

“The fluctuation clause clearly cannot cushion them against these variations. We have already engaged consultants on these 20 E-blocks to review the contracts so that we can look at new rates for subsequent approval by the Fund,“ he added.

Dr. Boadu was optimistic that the Fund would be able to deliver its target on the E-Blocks and other infrastructural commitments across the different levels of the education sector.