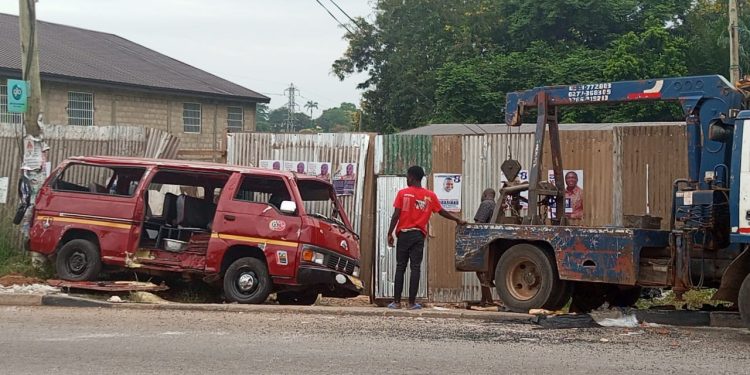 Several passengers have been rushed to the Komfo Anokye Teaching Hospital after they sustained injuries from a car crash near Ahodwo roundabout in Kumasi on Monday morning.

According to eyewitnesses, the incident occurred after a driver of a commercial vehicle attempted to overtake a tricycle.

The commercial vehicle then somersaulted, which led to occupants sustaining various degrees of injuries.

One of the occupants of the commercial vehicle, Benjamin Oteng narrated the incident to Citi News.

“An event at Vienna caused traffic at the Ahodwo stretch, so our driver decided to overtake a tricycle and a taxi. The passengers, out of fear, began shouting at the driver to stop. The driver paid no heed. Before we realised, the vehicle somersaulted thrice.”

“There were 15 of us on board the vehicle. Most of the passengers sustained various degrees of injury, some are badly hurt. I think the driver was not concentrating on the road. That is why he lost control of the vehicle. The injured persons have been rushed to the emergency ward of the Komfo Anokye Teaching Hospital.”