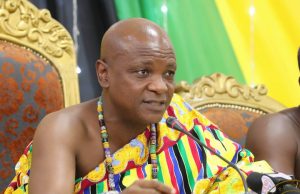 The Asogli State Council has reacted to some allegations made by the host of Metro TV’s Good evening Ghana, Paul Adom-Otchere, following the rejection of ex-gratia by Togbe Afede, the Agbogbomefia of the Asogli State.

The Asogli State Council in a statement said “our attention has been drawn to comments and allegations made by one Paul Adom-Otchere in his Good Evening Ghana programme on Metro TV on June 7, 2022, during his discussion of Togbe Afede XIV’s rejection of ex-Gratia payment made to him.”

The traditional council said it ordinarily would not have responded to comments from Paul Adom-Otchere, “knowing who he is, but while we ponder a more suitable reaction, specific allegations he made cannot be ignored.”

The traditional council clarified that the numbers Paul Adom-Otchere presented on Togbe’s attendance at meetings of the Council of State are both incorrect and misleading, and are a disingenuous attempt to discredit Togbe’s performance at the Council.

It challenged Adom-Otchere  to provide the Council’s attendance register, from which he compiled his numbers “for all to know the truth.”

“The Council had three committees, one of which Togbe chaired, the Economy and Special Development Initiatives Committee. And Togbe had an excellent plenary meeting attendance record,” it added.

The Asogli State Council also said Togbe Afede has not taken any loan from government.

It also clarified that Togbe Afede presented himself as a resident of Accra and did not claim any transport allowances from the Council.

It also noted that Togbe Afede did not say the ex- Gratia payments were illegal.

“He believes part-time work by our senior citizens should not merit Ex Gratia payment by our poor country.”

It finally clarified that Togbe Afede’s rejection of the ex-Gratia payment was not on partisan basis. 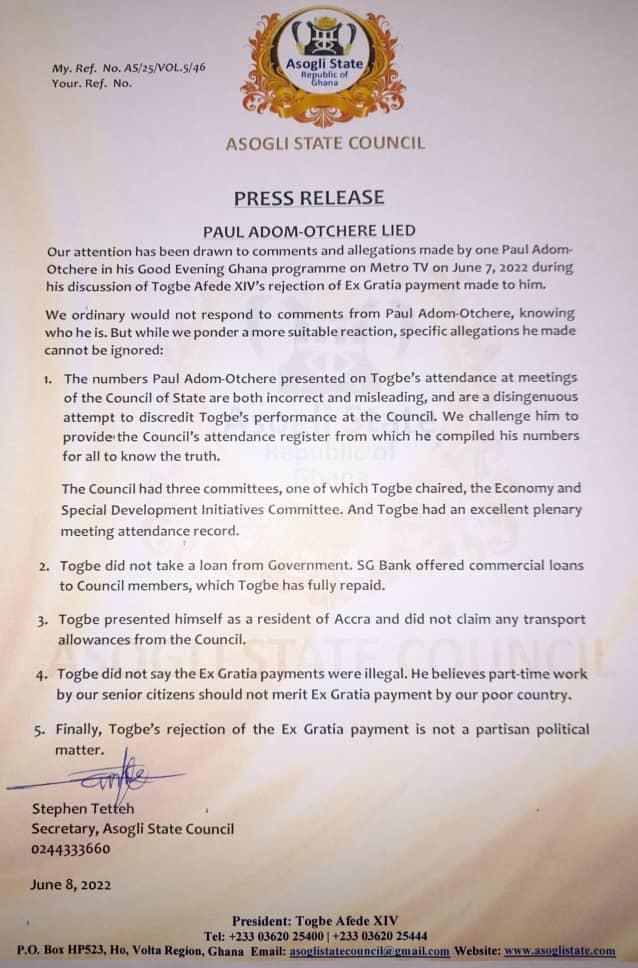 Paul Adom-Otchere believes Togbe Afede XIV has more money to refund to the state than the GHC365,000 ex-gratia he returned recently.

The traditional leader has been praised by a section of Ghanaians including the former UN special advisor on governance Prof Baffour Agyeman-Duah for his gesture.

‘All encroachers on CSIR lands will be dealt with’ – Henry Quartey