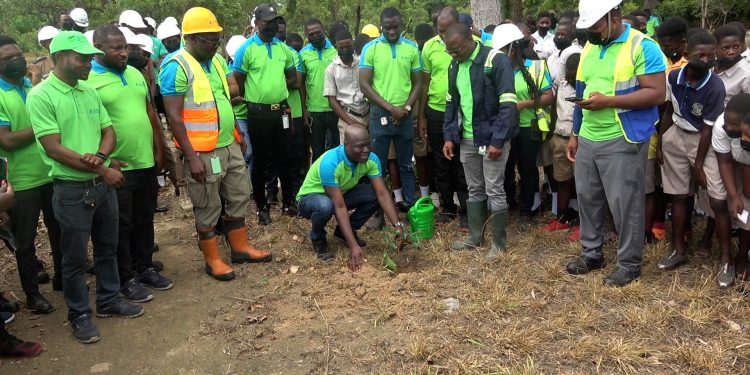 Management of the Bui Power Authority (BPA) says it is ready to establish a 1000-acre plantation to enhance the ecosystem to combat Climate Change within the Bui enclave.

This is to complement the target of the Bono Region, which is 1.2 million trees.

Mr Chrisentus Kuunifaa noted that the BPA initiated its Forest Resource Enhancement Programme (FREP) project in 2012 on a pilot scheme where a total land area of approximately 423 acres have been planted with different tree species including; Teak, Cassia, Cedrela, Mahogany among others.

Mr. Kuunifaa indicated that the FREP is one of BPA’s primarily climate change mitigation tools being implemented on the acquired land within the Black Volta Basin and Tsatsadu environs.

This involves two activities: reforestation activities and the conservation of gallery of both forest and savannah woodlots.

According to Mr Chrisentus Kuunifaa the Authority is collaborating with the Department of Parks and Gardens to transplant economic trees as part of its afforestation activities.

“Plans are underway to establish an additional 1,000 acres of plantations to enhance the ecosystem and combat climate change menace within the Bui Enclave. We are collaborating with the Department of Parks and Gardens to transplant all economic indigenous trees from our proposed Solar sites instead of the traditional clearing being practised.”

He added that the BPA will partner with the Ghana Education Service to establish Environmental Clubs in the schools to embark on woodlots establishment.

As part of the Green Ghana Project, the BPA is planting 20,000 seedlings to complement the Bono Regional target of 1.2 million trees.

The staff of the BPA were joined by the personnel of the Ghana National Fire Service, the military and pupils from the Jama DA JHS in Bole Bamboi of the Savannah Region and Bui Power Authority DA Junior High School in the tree planting exercise.