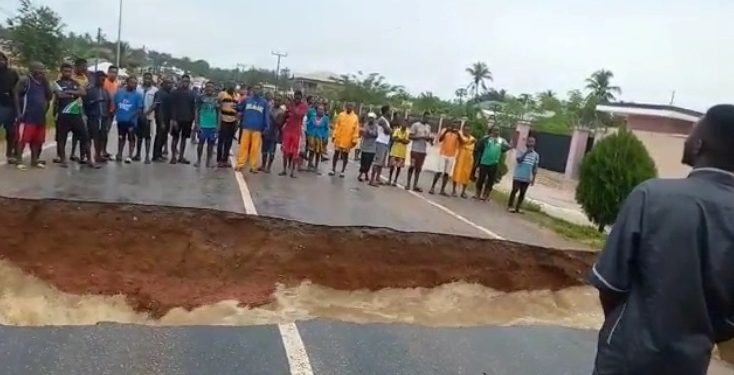 The Cape Coast to Twifo Praso Road will be closed to traffic today, Monday, June 27, 2022, to allow for repair works on the Jukwa bridge.

Torrential rains in the Central region saw the Surowi river overflowing its banks, causing the collapse of the bridge on the main Cape Coast to Twifo Praso road.

Engineers from the Ministry subsequently moved in from Accra and temporarily fixed the bridge within 24 hours, but a heavy-duty truck later got stuck on the bridge.

The Ghana Highways Authority in a statement asked motorists who intend to ply the stretch to use the Cape Coast -Yamoransa- Assin Fosu to Twifo Praso road.

The Twifo Praso to Cape Coast Road was cut off following a downpour in the area, leading to portions of the stretch including the bridge caving in.

Persons who were commuting to the Kakum National Park from Cape Coast had difficulty getting there as a result of the bridge, which had caved in.

The Minister for Roads and Highways, Kwasi Amoako-Attah, visited the site of the collapsed bridge.

The Minister, after touring the scene, pledged to ensure that the bridge is reconstructed, and the road made motorable.

He further indicated that an emergency response team has been constituted by his outfit to ensure roads cut off by floodwaters are reconstructed within 24 hours.

Meanwhile, the Member of Parliament for Hemang Lower Denkyira, Bright Wireko Brobbey who spoke to Citi News said he was impressed with the urgency with which the situation was attended to.