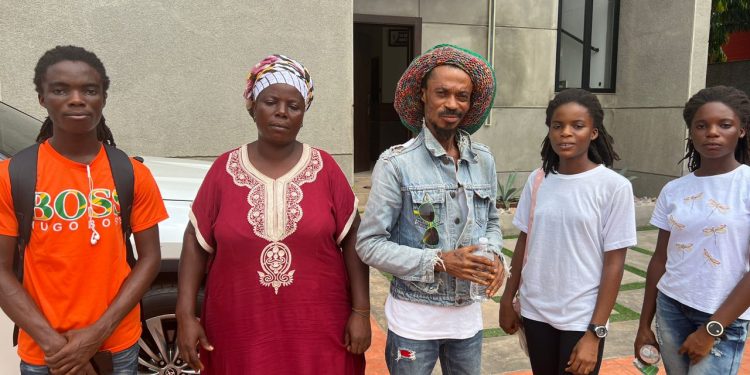 Non-governmental organisation, Child Rights International, has met the Marhguy family over the claim that one of the Achimota school Rastafarian students physically assaulted his father, Tereo Marhguy.

In a video which has since gone viral, the father of the boy is seen with bruises on his hand accusing his son, Tyrone Marhguy of attacking him.

The father, in the same video, threatened to kill the boy if it happens again, claiming that his son had been violent over the years.

Although Tyrone has declined comment on the accusation, he maintains that the act was in self-defence.

For the Child Rights International, one of the major players who supported the two Rastafarian boys in their legal tussle with the Achimota School when they were denied admission over their dreadlocks, it hopes to settle the disagreement within the family and find an amicable solution.

Meanwhile, the father has apologised for making the matter public.

According to him, he sent the video to close friends for advice, but it was leaked on social media.

Speaking to Citi News after the family met with Child Rights International over the allegations and threats he made, Tereo Marhguy said it won’t happen again.

“All what happened shouldn’t have happened. We should cool our tempers and sort it out. It is rather unfortunate it came out and people have formed their impressions. If it has really hurt anybody, I am really sorry. I apologise to everybody that something like this had to happen.”

Tereo Marghuy had accused his son of violently attacking him.

In a video posted on social media, the father was seen with bloody bruises on his hand, saying his son had allegedly abused him after a confrontation.

“He was supposed to repair a tablet for his sister, and then they were ready about an hour ago, but he was still sitting there watching TV. I went in there and asked Tyrone what was going on. He burst out and started insulting his sister and unplugged the laptop. He walked over to me and I threatened to slap him, and then he held my hand, so through the struggling up and down, I had blood everywhere.”