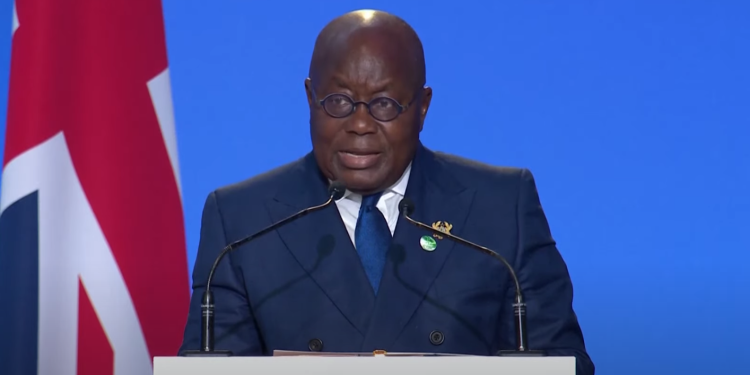 Nana Akufo-Addo says statistics available indicate that over 430 million people in Africa have been rendered poor by the war.

Speaking at the 2022 European Union Development Days Conference in Brussels, Belgium, Nana Akufo-Addo urged all to help end the war.

“Indeed, the recent United Nations report estimates that, about 70 percent of Africa’s economies are at severe risks of the Russian war in Ukraine. In the midst of this, 18 African economies have experienced credit downgrades even when all African economies are suffering from last year’s pandemic and we in Africa are also facing the risk of the so-called tantrums as investors exist in our markets thereby exacerbating the increasing cost of borrowing.”

He says more investors are leaving the continent, which is affecting local economies.

“At this moment, the World Bank tells us that the subsequent of the conflict, the number of poor people in Sub-Saharan Africa could rise from 413 million to 463 million this year – an increase of 50 million people.”

The current economic meltdown on the African Continent has on several occasions blamed the economic on a multiplicity of factors, including the COVID-19 pandemic and Russia’s recent invasion of Ukraine.

There have been calls to offer more support to African economies in the midst of ongoing global economic challenges.

Recently, the African Development Bank (AfDB) adopted a 10-year strategic plan to help revive African economies from the adverse impact of the COVID-19 pandemic and the Russian-Ukraine war.

The strategic plan, which was adopted at the just-ended 57th Annual Meetings in Accra, aims to drive investment into critical areas of the African economy and make the continent prosperous.

It will be implemented from 2022 to 2032 with a focus on agriculture mechanisation, value addition and exportation; just and realistic energy transition and private sector investment.

Other pillars of the plan include security, debt management, financial stability mechanisms, and leveraging the $25 billion equity of the African Development Fund (ADF) on international capital markets.

It is expected that the plan will build “a prosperous Africa, based on inclusive growth and sustainable development,” with special attention to economic growth and recovery, climate change, and energy, and a just energy transition.

Industrialization is Ghana's only way of withstanding market volatilities - Ahomka-Lindsay