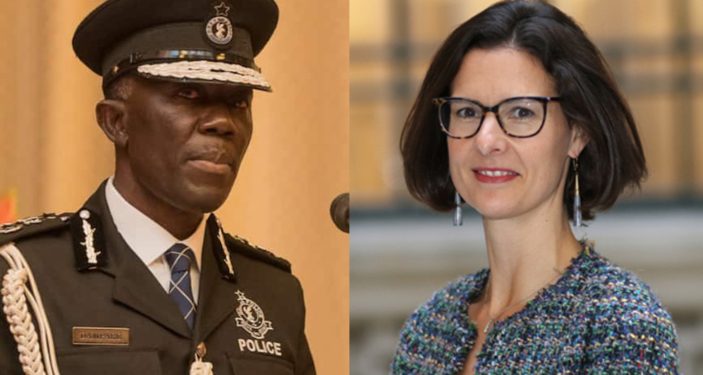 The Ministry of Foreign Affairs and Regional Integration says it has begun diplomatic talks between the Inspector General of Police (IGP), Dr. George Akufo-Dampare, and the British High Commissioner to Ghana, Harriet Thompson.

The British diplomat had incurred the wrath of Dr. Akuffo-Dampare, over comments she made following the arrest of #FixTheCountry convenor, Oliver Barker-Vormawor last month for careless and inconsiderate driving and non-observance of road markings at the East Legon tunnel in Accra.

Dr. Akuffo-Dampare in a strongly-worded statement, asked the diplomat to mind her own business when it came to matters of Ghana’s security and policing.

But Harriet Thompson maintains that her comment was not an act of interference that should warrant such a response from the police administration.

“To me, it feels like a stretch… Commenting on something that is of great interest to a lot of people in a country is not interfering in the affairs of that country,” the High Commissioner added.

The High Commissioner suggested that there was no chance her comments on Twitter could rile up Ghanaians and foment insecurity, as was suggested by the police.

“If I had thought there was the remotest chance of that, I wouldn’t be tweeting things like that. That is clearly not my intention,” Harriet Thompson said.

Ghana’s Foreign Affairs Ministry said it has taken notice of the row and has taken steps to intervene.

“In line with the general diplomatic practice of communicating with diplomatic Missions, preferably through direct engagement, the Ministry wishes to remain circumspect on its pronouncements on the matter. We have therefore initiated contact with both the British High Commissioner and Inspector-General of Police (IGP) to resolve the issue at stake”, the Ministry said in a release.

“Meanwhile, the ministry assures of its commitment to the strong historical bonds between Ghana and the United Kingdom, which through the years, have been deepened by, among others, the exchange of high-level visits on both sides as well as increased cooperation on trade, investments, and security.”

Harriet Thompson’s tweet said: “Oliver Barker-Vormawor, convenor of #FixTheCountry movement, arrested again, I understand [it’s] for a motoring offence [and he’s currently] on his way to court. I’ll be interested to see where this goes…”

The police also said the tweet was a violation of the Vienna Convention on Diplomatic Relations, which enjoins diplomatic missions not to interfere in the internal affairs of their host country.