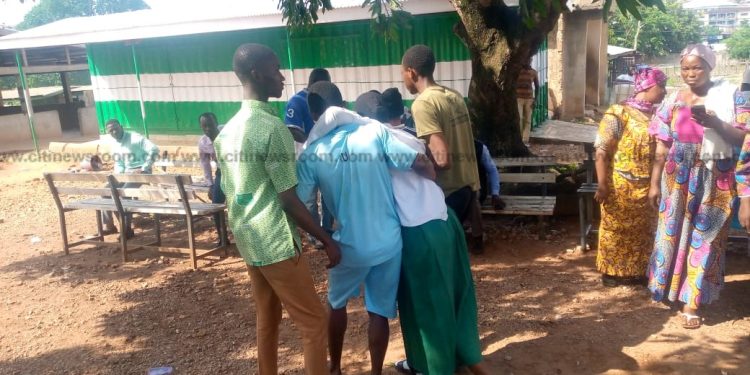 Fresh details emerging from the violent incident recorded at Islamic Senior High School at Abrepo in the Ashanti Region on Monday have revealed an incident of police brutality on a teacher who has now been left with difficulties in seeing.

An English teacher at the school, Kofi Antwi in a Citi News interview said he was slapped several times by an armed police officer who used the butt of his gun to hit him a number of times while he was on the floor in pain.

The victim, who had been brought in to testify before a committee of inquiry, said he has been going through severe pains since the incident.

According to him, he was telling a colleague that while he does not believe the demonstration by the student is the best way to air their grievances, he thinks they have a justifiable reason for the protest, and an officer who heard his statement immediately approached him and began attacking him violently.

He added that the tear gas they fired also affected him.

“Though nobody wishes for demonstration, the students had a justifiable cause. He [police officer] landed slaps on me, I fell on the ground, and he used the butt of the gun on me. Now, if I want to see, it is painful. When we were even going to the police station, I was telling them that I was severely wounded, but they didn’t take me seriously. Why should you do that. Some people wanted to come to my rescue, and they were arrested. One Inspector Obeng is the one who told them to land the slaps on me,” he said.

About 30 students of the school were rushed to the hospital after police allegedly opened tear gas on them while they were demonstrating over frequent knockdowns in front of the school.

The students of the school were said to have blocked the road in front of their school in the course of their protest, prompting authorities to invite the police.

The police have been accused of using excessive force to disperse the demonstrating students from the streets.

But the police service in its statement said it has restored calm to the school, while some of its men, as well as students, are receiving medical attention after sustaining injuries.