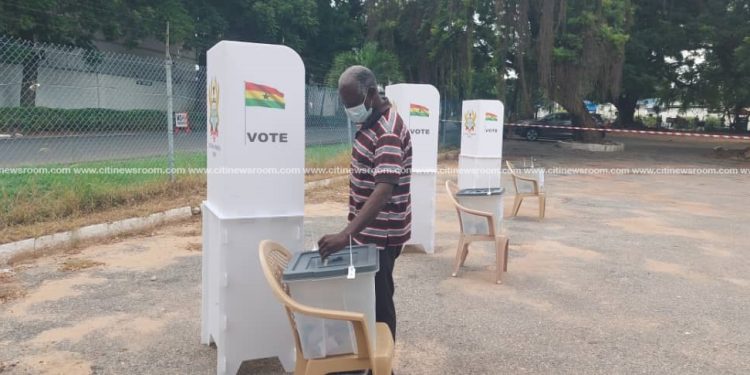 Delegates of the Ghana Journalists Association (GJA) across the country have begun voting to elect new executives to run the affairs of the association for the next three years.

In Accra, voting started at 8am at the Ghana International Press Centre, with some security presence at the voting centre.

Outgoing GJA president, Roland Affail Monney has charged the next leadership to tackle issues relating to attacks on journalists.

“Without the requisite capacity building, we will not achieve what is expected of you as journalists. So we need to receive top most attention in the next administration because safety issues are dominant now due to the series of threats against journalists”, he said.

Over 800 members of the GJA are expected to cast their ballots today to elect the new national and regional executives.

The election will take place at various polling centers across the country.

Editor of the Ghanaian Times and former General Secretary of the GJA, Dave Agbenu; communication consultant, Gayheart Mensah; and the Group Head of Corporate Affairs at the Tobinco Group, Albert Kwabena Dwumfour, are contesting for the position of President.

The Vice-President position is being contested solely by the incumbent, Linda Asante Agyei, while Audrey Dekalu is vying unopposed for the Treasurer position.

The General Secretary position has a new entrant; Akwasi Agyemang of Adom FM, who is challenging the incumbent, Kofi Yeboah.

The National Organising Secretary position has long-time crime reporter and current Foreign and Supplements Editor of the Daily Graphic, Mary Mensah slugging it out with Dominic Hlordzi of GTV who is a new entrant.

One of the Presidential aspirant, Gayheart Mensah has promised to ensure the protection of journalists if voted into power.

Gayheart Mensah intends to correct what he describes as the GJA’s laissez-faire attitude toward building systems that prioritise the safety of journalists in the line of duty.

“I am not proud of belonging to an association that only specializes in issuing press releases when journalists are attacked. Are we saying that, as a professional association, we cannot think and act proactively? That is one of the key areas I intend to look at.”

“The GJA needs the kind of leader who can knock on the door of IGP and have a discussion about the manhandling of journalists. Can we agree on guidelines? How will the security conduct themselves when they meet security agencies on assignment. These are the discussions that we need to have,” he said on Eyewitness News.