Man who allegedly tried to use daughter for money ritual remanded 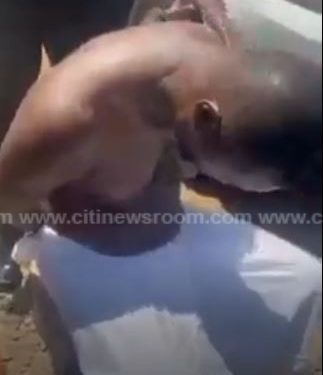 47-year-old Evans Kyekyeku Oppong, a resident of Fise, near Amasaman who was arrested after allegedly offering his 11-year-old daughter for money rituals has been remanded into police custody.

This was after the District Court refused to take the suspect’s plea.

The court presided over by Her Worship Ama Adomako Kwakye adjourned the case to June 20, 2022.

A statement from the Ghana Police Service said his lawyers will have access to him on Tuesdays and Thursdays between 9am to 5pm.

The suspect has been handed over to the Criminal Investigations Department at the police headquarters for further investigation and prosecution.

The case was initially handled by the Adentan Divisional Police Command after Mr. Oppong was arrested by the Oyibi police last week.

A herbalist in Oyibi in the Greater Accra Region, Nana Adu-Boafo, caused the arrest of Mr. Oppong.

The herbalist, who circulated a video of the arrest online, said: “The girl’s father came to see me, he told me he just landed in the country after staying overseas for a while, and it hasn’t been easy for him.”

“He told me he is a father of 12 and is offering two of them for money rituals. He offered me GH¢10,000 and other good surprises when the job is done.”