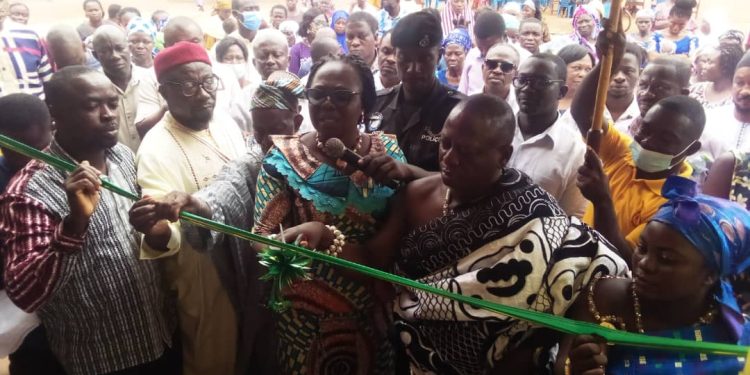 Bono Regional Minister,  Justina Owusu-Banahene, has called on workers of the Sunyani East Municipal Assembly to open themselves up and allow newly employed workers and their colleagues to learn from them to help the assembly accomplish its goals.

She said, “open up and let other people learn from you. That way, it will offer everyone the opportunity to contribute his or her quota to the development of the assembly and the country as a whole,’’ she said.

The Regional Minister said this during the final leg of working visits to the 12 Municipal and District Assemblies in the Bono Region to interact with Chief Executives, heads of departments and workers of the various assemblies to gather their concerns and solutions to help in the smooth running of the region.

As part of her visit to the Sunyani East Municipality, she also made time to commission completed works and to cut sod for the construction of a one-kilometer road at the Sunyani Magazine.

She said, the workers should endeavour to be role models to the youth and punctual at work and eschew negative deeds like dishonesty, laziness and absenteeism.

“We are role models, when we come to the workplaces, we play the role of parents and teachers to the younger ones. So let’s try to always dress decently and conduct our work professionally so that they can learn from us,’’ she added.

She said workers should continue to upgrade their skills to help the assembly achieve its full potential and to guide the future generation.

She also encouraged the assembly to collaborate with religious bodies to regularly organize clean-up exercises to help keep the municipality clean.

Speaking at the Sunyani Municipal Assembly Primary school where she commissioned a 6-unit classroom block, she called on management, staff and students of the school to adopt proper maintenance culture to enable the block to serve its purpose.

On his part, the Assistant Headmaster of the school, Frank Osei Owusu said the classroom block has come at a better time to help the school.

He said the school has been running a shift system where pupils come to the school from 7am – 11am and the second batch comes from 11am and closes at 3pm.

At the Sunyani Magazine where the minister cut sod for the construction of a one kilometer tarred road that also included walkways and single-armed streetlights, the contractor, Mr. Samuel Opoku said he will speed up work to complete the construction within 11 months’ time.

Justina Owusu-Banahene finally ended her one-day tour of the region at the Sunyani Chief Palace, where she assured Chiefs and Queen Mothers of the area of her readiness to find solutions to the region’s concerns.