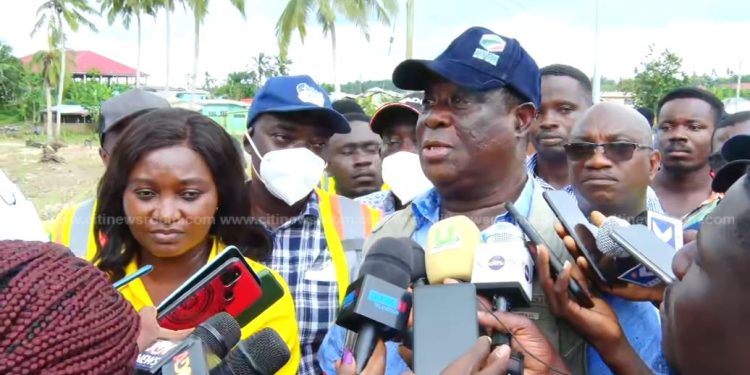 The Minister for Roads and Highways, Kwasi Amoako-Attah says his outfit has constituted a rapid response team that will ensure that roads destroyed by floods are fixed within 24 hours after destruction.

He made this known while addressing the press at Junkwa in the Central Region on Monday, June 20, 2022.

According to the Minister, the destruction of roads by floodwaters is unfortunate, and the Ministry is aware of many roads across the country that have been left in deplorable states and some completely destroyed such that communities are cut off.

But he said the ministry has put in place a comprehensive plan to ensure that roads that have been destroyed are fixed immediately.

“We’re having these challenges across the country. The government through the Ministry [of Roads and Highways] has put together a quick response team to deal with this type of situation and I want to assure not only the people of the Central Region but the nation that we have a strong and formidable programme on the ground so that when such things happen, we will move in to restore the road depending on the degree and state of the road,” he said.

The Twifo Praso to Cape Coast Road was cut off following a downpour in the area last week that led to portions of the stretch caving in.

The 22-metre bridge collapsed because the Surowi river had overflown its banks.

Mr. Amoako-Attah said while the government does not expect many of such incidents, there could be such developments due to the torrential nature of recent rains.

Meanwhile, the Minister said the government is focused on completely restoring the destroyed bridge to ensure that social and economic activities are brought to normalcy.

“Our immediate attention is to reinstate the road so that life comes back to normal. We can’t afford to leave it inaccessible for a long time,” he said.