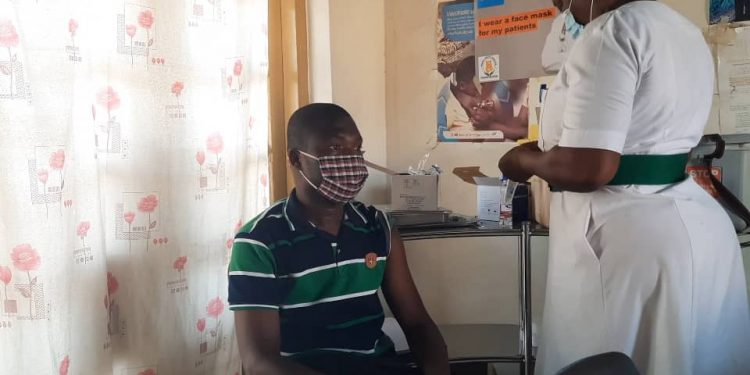 On Wednesday, December 15, 2021, a Twitter campaign under the hashtag #JusticeForAlbert trended in Ghana.

The campaign demanded ‘justice’ for a young man who reportedly died two days after taking a COVID-19 vaccine. The push appeared to be a genuine call by friends and sympathisers of the deceased, Albert Owusu. However, there is more to it.

A few weeks after the government of Ghana announced that COVID-19 vaccination would be mandatory for specified individuals and access to certain spaces, concerns were raised regarding the legality of the directive. Groups opposed to the move based their objection on grounds of medical ethics.

Part of the directive required state security officials and commercial drivers to be fully vaccinated, while citizens were mandated to show proof of vaccination before accessing stadiums and beaches.

The objection to vaccination was accelerated following the death of one, Albert Owusu. The deceased reportedly passed away barely 48 hours after being vaccinated.

Did Albert Owusu die from taking a COVID-19 vaccine?

Close family members disclosed that Owusu, a 20-year-old student at the University of Ghana, had returned home from school about three weeks earlier with mild sickness but died about two weeks later after taking the vaccine.

An uncle of the deceased, identified as Yaw Sarpong, said that doctors believe his nephew had contracted COVID-19 when he took the vaccine. He took ill later and died.

“He returned from the University of Ghana, Legon, on Saturday. He went to get the vaccine and began feeling feverish. His mother was praying in the house from around 2 pm to about 2 am. It was during the prayers that they realized he had passed out and died so the mother said she was of the view that he died from taking the vaccine. Three doctors at the Central Hospital said the boy had been infected with the COVID-19 before returning home. I can’t tell if he had any underlying condition because when he left for school he was fine,” he said.

The Eastern Regional Health Director, Dr Winfred Ofosu, also stated in an interview on December 22, 2021, that he was unaware of any such incident.

The development was followed by a spike in what appeared to be a network of Twitter users engaged in inauthentic coordinated behaviour to influence public opinion about Ghana’s COVID-19 vaccination programme. This was from hashtag #JusticeForAlbert. 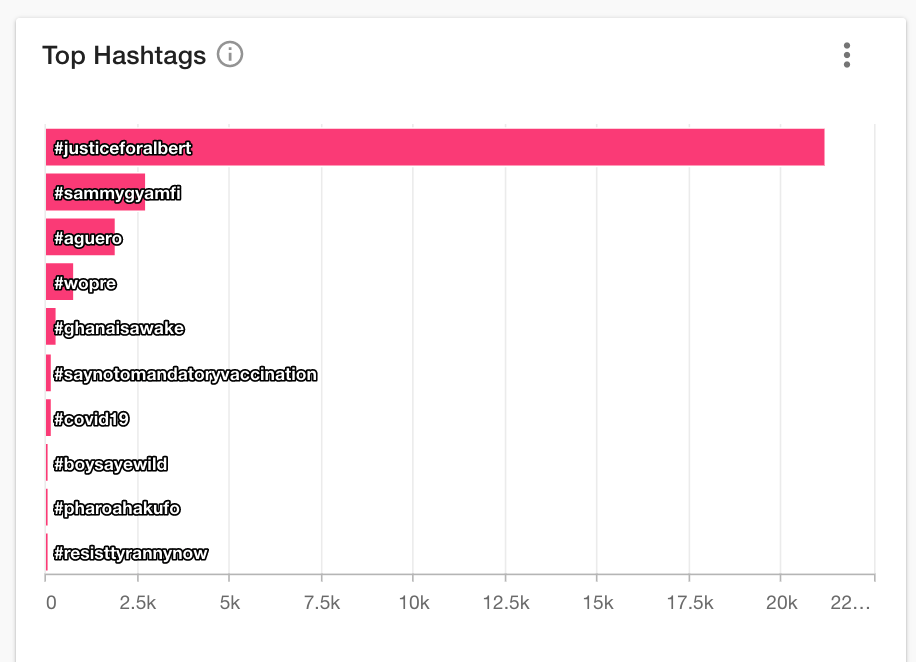 By the time the hashtag gained popularity, Ghana had vaccinated 6,609,366, representing 22% of its population. Common vaccines were provided by AstraZeneca, Johnson and Johnson, Pfizer, Moderna, and Sputnik V vaccines.

A thorough analysis of the trend pattern suggested a coordinated action hinged on different online content and a 26-second video uploaded by Twitter user @jashuawonder, who described himself as a friend of Owusu.

At the time of filing this report, the video had been shared more than 2,500 times and received over 178,000 views. For this investigation, over 3,000 tweets (including retweets) made between December 15, 2021, and December 18, 2021, related to the hashtag were downloaded into a spreadsheet and analysed. Retweets constituted 84% of all the data around the hashtag.

What do Twitter’s policies say?

Coordinated inauthentic behaviour is against Twitter’s terms of service and is spelt out in its policy regarding spam and manipulation.

“You may not artificially amplify or hinder conversations by using multiple accounts or coordinating with others,” the policy spells out.

Who are those behind the hashtag?

The first tweet using the hashtag was made by @jashuawonder who blamed the vaccine for cutting short Owusu’s life.

It was subsequently tweeted and retweeted from what appeared to be from other parts of the world.

A sentiment analysis of the hashtag showed that several Twitter users innocently used the hashtag, while most others appeared to be part of a coordinated operation discrediting COVID-19 vaccines.

Our analysis revealed that some of the accounts central to the hashtag’s amplification had bot-like behaviour, which is very common in most Twitter disinformation campaigns.

Accounts with bot-like tendencies typically tend to be active all day, have long dormancy periods but are suddenly involved in a coordinated campaign and are newly created with an incommensurately high number of tweets, and support a specific hashtag.

Dozens of other accounts with the same characteristics were discovered, most of which were created in December 2021, just a few days before the hashtag trended.

A visualisation of the network of tweets around the hashtag showed that those involved in the coordinated inauthentic behaviour mentioned President Akufo-Addo, often criticising him and the government for the vaccination plan.

An analysis of the downloaded data in Microsoft Excel revealed that while some accounts posted the hashtag sparingly, their huge online following and influence helped to amplify the campaign.

@Efiaodo1, with over 508,000 followers and a record of a stance against the government’s planned ‘mandatory’ vaccination programme tweeted the #JusticeForAlbert hashtag once but was mentioned by several  Twitter accounts involved in the coordinated inauthentic behaviour.

@Sammy Gyamfi, (150,000 followers) the National Communications Officer of the National Democratic Congress (NDC) never used the hashtag but was mentioned and referenced many times by the top influencers involved in the campaign.

Another visualisation of the network does not depict any distinct clusters or strange behaviour; however, it highlights some of the influential accounts involved in the CIB; tweeting and retweeting to amplify the hashtag in a coordinated manner. These influential accounts, that tweeted, retweeted and or had their tweets retweeted by many people are captured in the graphs below:

The accounts had their tweets retweeted by others the most.

The accounts below retweeted others’ tweets the most.

A total of 23 Twitter accounts were identified to be leading voices on the #JusticeForAlbert campaign. Each of these accounts has been analysed, and details presented in the table below indicate when they were created, the percentage of the chance of being a bot account, their most popularly used hashtag since creation, and other unique traits of their Twitter behaviour.

The accounts involved in the operation retweeted each other’s tweets about COVID-19 and vaccines.

The hashtag dominantly used by the influencers identified appears to show that they were closely coordinating to sway public conversation on the COVID-19 and vaccines inorganically.

This investigation could not prove that the coordinated behaviour was politically motivated; however, many of the accounts involved in the campaign often cited the national communications officer of the opposition National Democratic Congress (NDC), Sammy Gyamfi, who had made public statements denouncing the government’s vaccination plan. The accounts applauded him for the “good fight.”

An analysis of tweets of some of the influential accounts and the source of the viral video that gave the campaign momentum on Wednesday, December 15, 2021, shows that they had previously participated in similar anti-vaccination campaigns, mainly in Nigeria.

The campaign in Nigeria included the #iStandWithPastorChris campaign in 2020, declaring solidarity with Pastor Christopher Oyakhilome, the founder and president of LoveWorld Incorporated, also known as Christ Embassy Church. He claimed that COVID-19 was linked to the introduction of 5G, among other allegations related to the vaccines.

As the analysis shows for Ghana, these accounts identified an influential figure’s anti-vaccination stance and made several tweets to amplify their campaign and mentioned government agencies and officials implementing COVID-19 vaccination programmes in vile tweets.

@jashuawonder, for instance, prior to a 12-month break on Twitter in 2020, consistently shared images of Christopher Oyakhilome and some of his anti-vaccine comments.

@AyewaMensah also, between April and May 2020, engaged actively and frequently on COVID-19 issues relating to Nigeria on Twitter. He often mentioned/responded to (former) anti-vaxxer and influential politician, Femi-Fani Kayode.

@AyewaMensah again was one of those who actively shared and engaged with Pastor Christopher Oyakhilome’s solidarity hashtag, #iStandWithPastorChris.

Internal or external parties often sponsor coordinated inauthentic behaviour. There was no concrete evidence that this operation was financially sponsored. However, the evidence points to an ideological drive focused on religion and of church members rallying around Pastor Christopher Oyakhilome and his LoveWorld Incorporated.

This investigation could not prove that the coordinated behaviour was politically motivated; however, many of the accounts involved in the campaign often cited the national communications officer of the opposition National Democratic Congress (NDC), Sammy Gyamfi, who has made public statements denouncing the government’s vaccination plan. The accounts applauded him for the “good fight.”

The evidence gathered suggests that the #JusticeForAlbert campaign breached a number of Twitter’s policies including the ones on COVID-19 misinformation, coordinated harmful behaviours, and misleading and deceptive identities.

Among others, the tweets in the campaign claimed that the pandemic is a hoax and that vaccines are generally dangerous and have been covered up by governments.

Twitter’s policy on coordinated harmful behaviours defines informational harm as one that “adversely impacts the ability for an individual to access information fundamental to exercising their rights, or that significantly disrupts the stability and/or safety of a social group or society including medical misinformation i.e. COVID-19” and takes actions against accounts engaged in such actions.

Again, evidence in the campaign points to deception in bios on some accounts including the use of different locations from Nigeria to Ghana to amplify the campaign.

“You can’t use a fake identity to disrupt the experience of others on Twitter. Using fake accounts in conjunction with other behaviors that violate the Twitter Rules will result in stricter enforcement actions. This includes operating fake accounts to engage in spam, interfere in civic processes, carry out financial scams, artificially inflate engagement, or abuse and harass others…. [including] Intentionally misleading profile information, such as profile location,” Twitter’s policy states.

The #JusticeForAlbert campaign in Ghana ended before January 1, 2022; however, this report may be updated when new information about this operation emerges.