US trains Ghana’s personnel on how to manage earthquake disaster 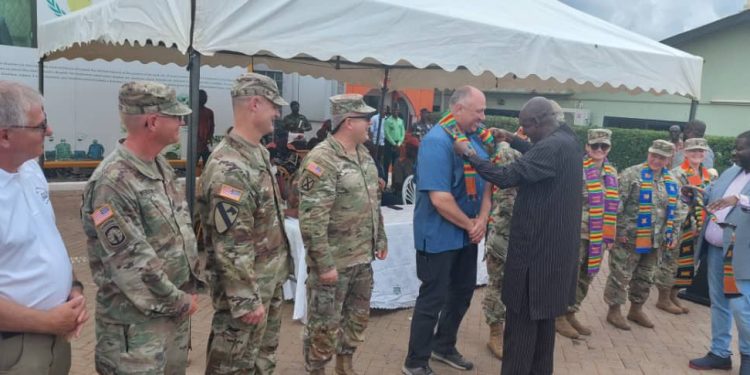 Ghana and the US have partnered to train security and emergency service personnel in disaster management in the event of an earthquake in the country.

The three-day simulation exercise was done at the Trade Fair Centre, the Tema fishing harbour and other selected earthquake fault lines.

Speaking at a closing event, the Interior Minister, Ambrose Derry said any form of earthquake disaster has the potential to cripple the country’s economy and livelihoods, hence an exercise such as this goes a long way in preparing the nation for swift emergency response measures.

Unlike rainstorms, earthquakes are unpredictable. That’s according to seismologist, Nicholas Opoku, at the geological department.

The first earthquake disaster recorded in Ghana was some 80 years ago. Meanwhile, the country records earth tremors from time to time, with the most recent at Kpando in the Volta Region last year.

According to Nicholas Opoku, the least a nation can do is to put in adequate response mechanism that can easily rescue lives.

The National Disaster Management Organisation (NADMO), in partnership with the US Department of Emergency Services and members of the North Dakota National Guard, undertook simulation exercises to build the capacity of the country’s emergency services including personnel from the military, police, ambulance, national fire service among others.

Ambrose Derry noted that, any earthquake disaster that may hit the country will have devastating consequences on lives and livelihoods with colossal economic implications.

He believes the intervention by the US government to build the capacity of Ghanaian officials is commendable.

Leading the members of the North Dakota National Guard, Lt. Col. Mark James McEvers, expressed gratitude to the Ghanaian government for its commitment and support for state agencies to contribute meaningfully during the three-day exercise.

The Bilateral Affairs Officer of the US Embassy in Ghana, Major Jarrod Simek noted that the US government committed $600,000 to the simulation exercise.