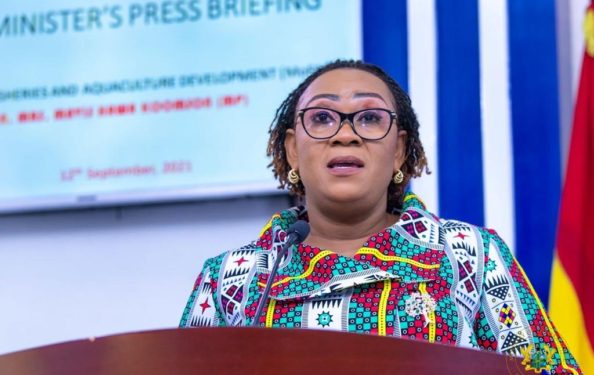 Fisheries and Aquaculture Minister, Mavis Hawa Koomson says her outfit has developed and deployed a new software that promotes the efficient management of premix fuel in the country.

She said the move is part of efforts to tackle smuggling of the fuel product.

While speaking in Parliament, she said the new system allows her office to track the movement of pre-mix fuel across the country.

Hawa Koomson says the software which is currently being implemented gives details of the product and its distribution point.

“Now we are coming with a more efficient one [technology]. When I am even in the office, I can see the truck that is loading and the quantity that will be in the tank and whenever a fisherman draws premix fuel from the dispenser, I will know,” he said.

Premix fuel smuggling is still a major issue in Ghana.

Following a shortage of the product in Jamestown earlier this year, the National Premix Fuel Secretariat vowed to deal with persons who engage in the hoarding of premix fuel.

Attributing the shortage in supply to global challenges, the Administrator of the Premix Fuel Secretariat, Nana Abrokwa Asare, cautioned the public against the hoarding of the limited resource.

He said the Secretariat has observed the trend of hoarding during supply challenges such as is being experienced.

“Usually when we have challenges in the system, the issue of hoarding and exorbitant sale of premix fuel is on the ascendency. People want to thrive on the shortages to buy as much as they want and then sell at a higher price. We are dealing with such people. People who are found culpable will be arrested, and we make sure that punitive measures are brought against such persons,” he said.