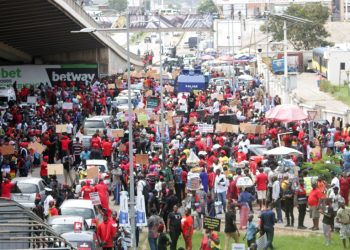 Leaders of the pressure group, Arise Ghana, have revealed plans to embark on a second demonstration on August 22, 2022, this time in Kumasi in the Ashanti Region.

“In keeping with our objective of championing the interest and welfare of Ghanaians, AriseGhana will be holding a mammoth demonstration on the 22nd of August 2022 in Kumasi, the capital of the Ashanti Region. Through this demonstration which will be the second of the series of demonstrations we intend to hold across the length and breadth of the country, Ghanaians from all walks of life will congregate in the garden city to protest against excruciating economic hardships imposed on them by the callous Akufo-Addo/Bawumia government,” Bernard Mornah, a member of the Arise Ghana group said while addressing the press on Tuesday.

The pressure group also asked the Ghana Police Service to drop all charges against 31 of its members who were arrested during the maiden demonstration exercise in June.

During the protest on June 28, some protesters were arrested by the police.

The arrest, according to the Police, was a result of the demonstrators’ involvement in a “violent attack” injuring some of its officers.

Leaders of the group, at a press conference in Accra, said all innocent persons arrested, will have legal representation as they are poised to prove their innocence.

“AriseGhana will continue to follow up on all victims of the brutalities of the Dampare-led Police service until their full recovery. We have instructed our lawyers to institute legal action against the Ghana Police Service and the Republic for the payment of appropriate and adequate compensation to all injured persons. We shall not rest until all injured persons get justice.”

“Also, AriseGhana will continue to provide the necessary legal support for all the innocent protestors who were arrested and are currently being persecuted by the tyrannical Akufo-Addo/Bawumia government until their innocence is vindicated,” Bernard Mornah added.