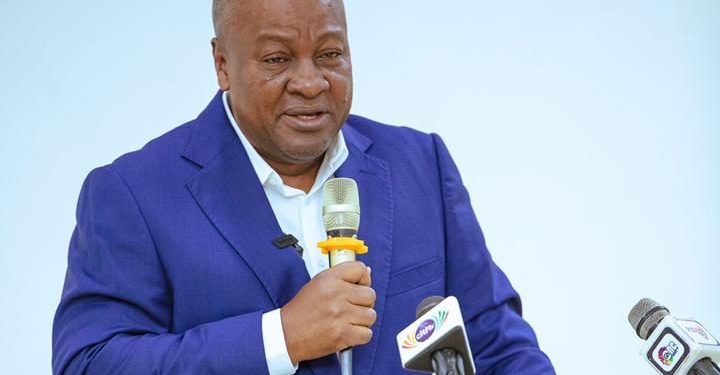 Former President John Dramani Mahama has charged Members of Parliament in the Minority Group to keep a keen eye on the activities of the Executive arm of government.

Delivering a speech at a closing ceremony of a retreat for Minority Group MPs at the Volta Serene hotel in Ho on Sunday, July 17, 2022, Mahama said the style of this administration has been to subjugate and dominate institutions for parochial and partisan gain, and as such, there is a need for it to be monitored.

“These institutions have thus become pliant tools for the furtherance of the political ends of the New Patriotic Party (NPP) and President Akufo-Addo,” he added.

He named the Electoral Commission as one of such institutions “which instead of making it easy for our citizens to take part in elections, rather takes delight in making it difficult. ”

“They appear determined to ensure the disenfranchisement of sections of our population at all costs through a misguided insistence on the use of the Ghana Card as the only source of identification for a voter card. How do you do this, knowing that the Ghana Card is not available to everyone who should have one?”

“You [Minority MPs] have become the immediate hope of a people who labour under irresponsible governance and abuse of office. There is the need therefore to meet this expectation by injecting further impetus into your work by keeping an even keener eye on the activities of the Executive.”

He admitted that the Ghana Card is a relatively new feature of the country and has its merits in the scheme of things.

His contention is that it is being brandished more as a political tool around which all manner of schemes is being fashioned ahead of the elections.

He believes there is the need to allow sufficient time for its full integration “before this kind of unhelpful exclusion of all other legitimately acquired, credible and time-tested forms of identification is implemented.”

Mr. John Mahama suspects foul play with the “haste on the part of the Electoral Commission to exclude all other means of identification.”

Even though the Electoral Commission has clarified that it is only demanding the Ghana card for continuous registration and is not in the process of compiling a new one,  Mr. Mahama is not convinced.

He is demanding a system that enables all political parties and relevant stakeholders to possess the capacity to monitor same in real-time, to avoid fraud and exploitation to the undue advantage of any party.