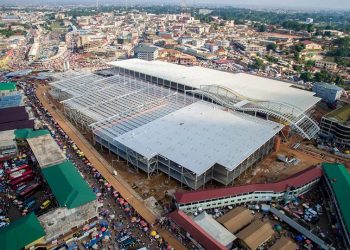 The National Coordinator of the Monitoring & Evaluation Secretariat at the Office of the President, Gifty Ohene Konadu, has said that she is completely overwhelmed with the level of progress of the Kumasi Central Market and other projects.

According to her, considering the factors that delayed the project for one year compared to the about 53% completion rate of the entire market facility, she could only praise the government, contractors, and the consultants of the project for a good job done.

Madam Gifty Ohene Konadu also expressed her happiness about the local content of the project, where 98% of the about 450 workers are Ghanaian artisans.

Madama Konadu was also impressed with the construction of well-designed drainage facilities to deal with the perennial flooding associated with the area whenever it rains heavily.

That notwithstanding, she was also convinced with the design work that gave free access to the facility to Persons With Disabilities.

Madam Konadu made these observations on behalf of President Akufo-Addo on Thursday, June 30, 2022, when she paid a working visit to the project site of the Kumasi Central Market as part of her five-day tour to the Ashanti Region to inspect the project to inspect the level of progress of ongoing government projects.

Gifty Ohene Konadu during the inspection of the facility proposed to the contractors of the facility to consider factoring in the project construction of a separate space where the market women could go and cook their own food considering the fact that they had to leave their various homes at dawn to the market and close very late.