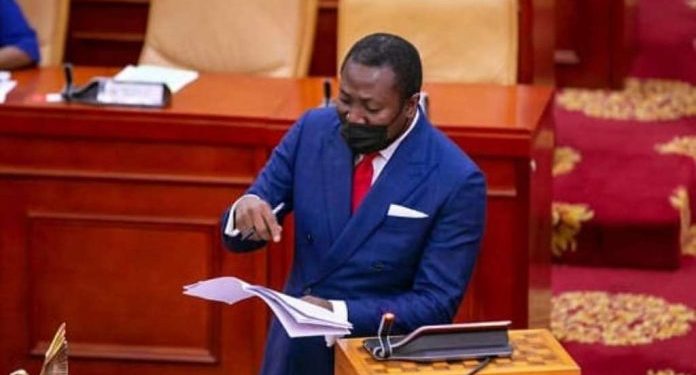 The Deputy Majority Leader of Parliament, Alexander Afenyo-Markin has rejected claims that the Finance Minister breached some provisions of the constitution regarding Monday’s presentation of the mid-year budget statement.

Mr. Ken Ofori-Atta appeared before the House on July 25, 2022, and presented the mid-year budget review but did not seek additional funds as has been the norm over the years.

While some however thought that the Minister should have come to the House with a motion for approval, the Deputy Majority Leader said the Minister was not seeking to spend beyond allocations already approved, hence did not need to seek further approvals from the House.

“As you may be well aware, under the Appropriation Act, we provide for a ceiling so once the Minister is not going outside of the ceiling, it is only proper for him to update the house as to what he is using the appropriation for and this is what he came to do.”

“So in simple terms, the Minister did not come to seek parliamentary approval. He already has that approval and the expenditure he is making is within that threshold. The minister is well fortified by the provisions of the constitution, so anyone who attempts to say that there was a motion required to be moved may be in error”, he explained.

The Nana Addo Dankwa Akufo-Addo administration’s refusal to ask for extra funds with the 2022 mid-year budget comes on the back of reduced revenues and the underperformance of the controversial electronic transfer levy.

Recent economic struggles have seen the government turn to the International Monetary Fund for support.

During the Mid-year budget review, the Finance Minister admitted that there had been “some major shifts in our budget assumptions” when compared to November 2021, when the full budget was presented.

“These changes have led to reduced revenues, increased interest payments and changes in interest rates and exchange rates.”

These challenges notwithstanding, the minister said the government was committed to staying within the appropriation for 2022.

“In spite of the underperforming revenues and strong external headwinds, we are not seeking additional funds in this Mid-Year Review. We are determined to efficiently use the windfall from the upstream Petroleum Sector to make up for our revenue shortfall and aggressively improve our revenues even as we rationalise expenditures,” Mr. Ofori-Atta said.

The government had earlier indicated that it will be cutting down expenditure to align revenue targets.

The government earmarked GH¢145.4 billion to meet government expenditure for the 2022 fiscal year from the Consolidated Fund and other public funds.