Parents urged to desist from exposing children to harmful activities 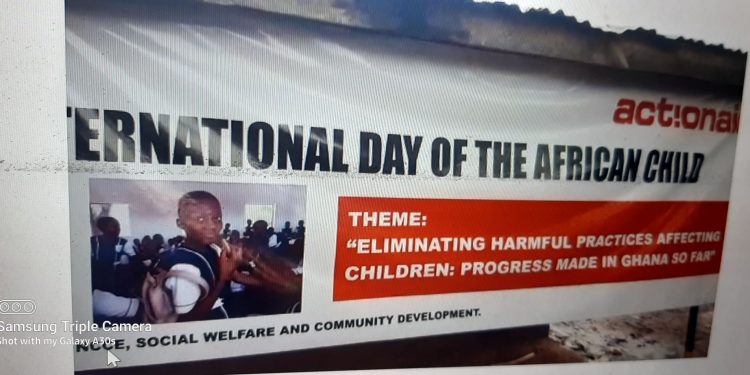 As part of activities to mark this year’s celebration of the International Day of the African Child, parents have been urged to desist from exposing children to harmful activities.

Children, especially those in Africa, are mostly exposed to negative activities such as early marriage, and forced or betrothal marriage, which affects their well-being, sometimes leading to school dropouts.

The event held at Kanjoo in the Nanumba South District in the Northern, was under the theme, “Eliminating harmful practices affecting children: Progress made so far in Ghana”.

The African Child Day is set aside to commemorate and celebrate the African child.

In Africa, many underage girls are given out for early marriages or immediately after birth and betrothed to elderly men.

To mark this year’s celebrations, ActionAid Ghana, in collaboration with other stakeholders, celebrated the event at Kanjo in the Nanumba South District in the Northern region.

The celebration brought together school children and community members.

“I will urge parents to desist from exposing children to practices that could be harmful to their lives. Let’s encourage children’s education, as it is the way forward. Children should not be forced into marriage or be given work that could pose danger to them.”

“The children are the future leaders, and they must be guided to be responsible. Let’s refrain from exposing them to dangers. Child labour should not be encouraged.”

The district Girl Child Officer at the Nanumba South Education Office, Musah Amina, spoke on the dangers of some of the harmful practices.

“There are so many dangers associated with some practice children are usually engaged in such betrothal marriage, child labour, teenage pregnancies among others. This leads to school drop and it must be discouraged.”

The Commission on Human Rights and Administrative Justice (CHRAJ) urged parents to ensure they register their children for birth certificates.