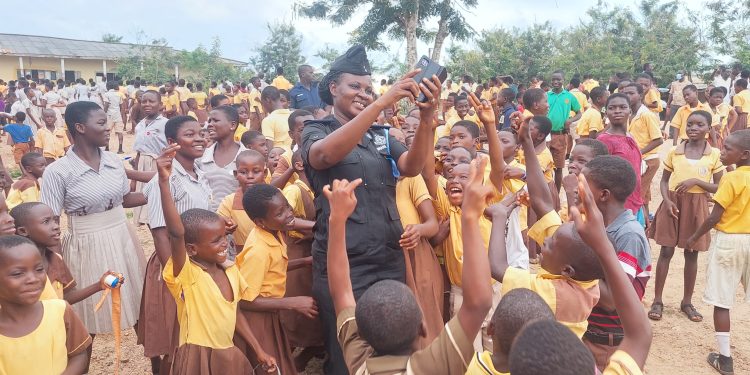 In line with the proactive prevention policing strategy of the Ghana Police Service, the Service has introduced a comprehensive programme to educate the general public on Human Trafficking and its related offenses.

The education will cover all stakeholders, including school children, victims community members, and especially those in communities most affected by human trafficking.

The outreach programme, was aimed at sensitising the pupils on the phenomenon of child trafficking, its adverse effects on victims, and society as a whole. The team also took the opportunity to educate pupils and staff on sexual offences and how to mitigate such occurrences. They were also encouraged to report sexual offences to the police for action.

In all, one thousand and fifteen (1,015) pupils and 15 teachers from Gomoa-Dago Basic A & B, Trinity Academy, and Success Academy participated in the sensitization program together with two Assembly Members from the Gomoa-Dago community. ​

We are grateful to the teachers of the Gomoa-Dago community and the three schools for availing their pupils and staff to the Police for the programme.

“We want to assure the public that the outreach programme will continue in other communities across the country in order to enhance security awareness among targeted groups and also build closer relationships between the Police and the public.”