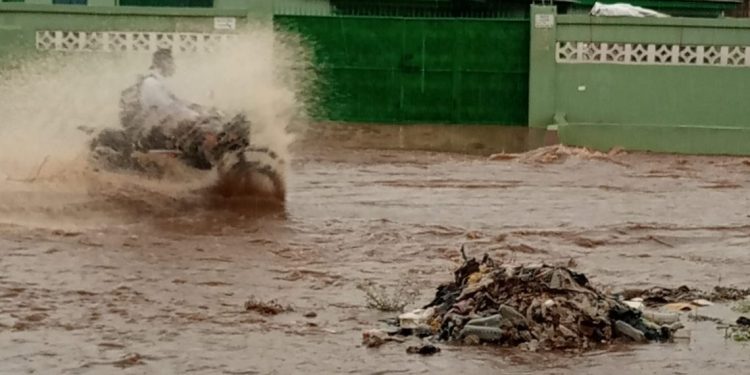 The Municipal Chief Executive for Obuasi in the Ashanti Region, Elijah Adansi-Bonah has urged residents living in flood prone areas to relocate in the face of continuous rains in the area.

He is also warning residents about the dumping of refuse into open drains, which he said has become a “pathetic” situation.

The MCE’s comments come after areas including the Central Business district, Mensahkrom, and Nyamesu were heavily flooded following a few hours of rain last week.

Homes of people were submerged in the flood waters causing damage to several properties.

The MCE told Citi News that while his outfit does its best to expand existing drains to be able to hold more rain water, residents, as well as local authorities, must also do their part by making sure the drains are free of refuse.

According to him, the indiscriminate disposal of refuse into the drain is a major factor for the flooding situation.

“Government has a role to play, nananom and residents have a role to play. Let’s come together and address this. One pathetic thing I have seen is the fact that people dump refuse into the drains. We’ve seen so much refuse and it’s unfortunate. Let’s dispose of our refuse properly. What people have to do is maybe leave your place if you know it is an area that gets flooded. You have to leave until we are done and solved the problem of drainage. We will continue to experience this if we don’t stop the indiscriminate dumping. We will speed up with what we are doing,” he said.

Last week, a number of residents in Obuasi were displaced following the flooding incident.

Many affected persons had to scoop water out of their rooms, while others have been forced to leave their homes.

Some major roads were flooded as commuters faced difficulties moving around.

Some persons including students, were trapped as a result of the floods.