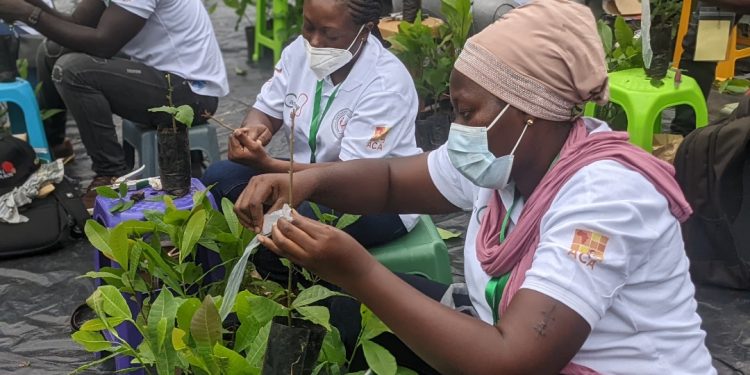 Among the challenges of the cashew industry in Africa over the years is inadequately skilled labour across the value chain.

This has affected the growth of the industry in general, but especially in good farming practices, processing, marketing, and local consumption. Capacity building, is, therefore, a necessity in ensuring the sustainability and growth of the African cashew industry.

To address this challenge, the Market Oriented Value Chains for Jobs and Growth in the ECOWAS Region (GIZ/MOVE) and the African Cashew Alliance (ACA) with support from various governmental institutions and other stakeholders have been co-organising the Cashew Master Training Program (MTP).

The Cashew MTP aims at building a strong expert base for the cashew industry by increasing the theoretical knowledge and enhancing the practical skills of cashew experts and newcomers while sharpening their self-awareness and attitude to consequently promote the competitiveness of the African cashew industry. The three weeks intensive training program in three sessions across a five-month period is facilitated by capacity development experts with a great understanding of the cashew industry and dozens of cashew experts as resource persons.

On Friday, 29th July 2022, 74 people, including five nursing mothers, from 10 African countries graduated from the 14th edition of the Cashew MTP, in Sunyani, Ghana. This increases the total number of MTP graduates to one thousand and thirty-seven (1037) from 20 countries since the inception of the training in 2014.

The graduates of the 14th edition were made up of 63 participants and 11 learners from 10 countries: Ghana, Cote d’Ivoire, Nigeria, Benin, Togo, Sierra Leone, Gambia, Burkina Faso, Senegal, and Guinea-Bissau.

For years, the participation of women, especially nursing mothers in many training programs has been a challenge. Women are mostly at a disadvantage as they are either faced with the decision to leave their children at home or are concerned about the likely inconveniences having their children with them at such international training will cause them and others. Women, particularly nursing mothers, as a result, continue to lose opportunities to participate in important career and personal training programs, affecting their professional and personal growth.

The organizers of the MTP have always prioritized women’s inclusion in the selection of participants. To make it more convenient for nursing mothers to fully participate in the training program without much worry about their children, they had the opportunity to attend all three sessions of the training with a nanny of their choice, some with their husbands, while extra provisions were made by the organizers by employing the services of a professional nurse and nanny to cater for kids while their mothers were in the conference room.

Out of the 74 graduates of edition 14, 29 were women, including five nursing mothers.

Speaking at the closing and awards ceremony of the 14th edition, the Team Leader of the GIZ/MOVE project, Rita Weidinger, said the extra provisions made for nursing mothers were part of conscious efforts to ensure gender equity and transformation in MOVE’s capacity-building agenda for the cashew industry in Africa.

“The Market Oriented Value Chains for Jobs and Growth in the ECOWAS Region (MOVE) funded by the German government remains committed to capacity development incorporating gender equity and gender transformative approaches. Seeing the confidence that women Master Trainers exude taking the space on stage and the nursing mothers attending with their children and even the children seated today at the learning table makes me very proud and happy,” she said.

She added that the GIZ/MOVE is creating a network of women experts in the cashew industry.

“Since 2017, we have started a network of cashew women with four publications full of life stories so far.  I hope to read some more of the women graduating today,” she said.

A representative of the graduating class and a nursing mother, Dedesi Nyanyegbe Aimee, who attended the training from Benin with three children and a nanny expressed gratitude on behalf of the graduands, especially the nursing mothers, to the organisers of the MTP for giving them the opportunity to learn and develop themselves.

She was particularly thankful for the special arrangements put in place for the nursing mothers to attend with their children and a nanny.

Mary Asari, one of the nursing mothers who graduated was particularly grateful to the organisers for the opportunity to be at the training with her husband and child. Mary started her MTP journey in 2021. She however could not complete the program because she had a baby in the process.

“I was part of MTP 12. I came for the first and second sessions, but I couldn’t attend the third session. I thought that was the end. But the organisers offered me another opportunity and even gave me the opportunity to come with my husband to take care of our child. His presence here helped me to focus on the training. I am glad to have finally graduated from MTP,” she said.

Managing Director of the ACA, Ernest Mintah, believes the role of women in developing the African Cashew sector cannot be overemphasized.
“Women play an important role in cashew. Over 2 million women are involved in cashew one way or the other across the value chain in Africa. We will continue to give as many women as possible the opportunity to build themselves through the MTP,” he said.

According to him, the ACA will remain committed to the MTP initiative which aims at strengthening and building participants for the sustainability, competitiveness, and growth of the cashew industry in Africa. He believed that with the number of Master Trainers so far, the African cashew industry is poise for growth.

‘’In the process, 962 participants have already graduated from the MTP program, and we are here today seeing the graduation of 63 new graduands and 11 learners from 10 different countries which effectively puts us past the one thousand mark, and we do know that with that kind of number produced in Africa, we are prepared to significantly and effectively impact the cashew sector on the continent,” he said.

While entreating the new graduates to be agents of positive and impactful change, he called on them to take responsibility for their personal learning and development by exploring other opportunities and learning platforms in the cashew industry.

Highlighting the significance of cashew and the need for cashew by-products processing and marketing, he emphasized the need for participants to take advantage of this year’s ACA Cashew Conference to learn and broaden their horizons.

“This conference brings together all the actors of the cashew value chain, and it’s held in the various cashew-producing countries. This year, it will be held in Abuja, Nigeria under the theme; Strengthening Sustainable Kernel & By-products Marketing in the African Cashew Industry” he emphasized.

The United States Department of Agriculture (USDA), through its LIFT project, implemented by Shelter for Life sponsored 12 of the participants of the 14th edition of the MTP. The Coordinator of USDA projects in West Africa, Gerald Tumball said “the USDA’s interest in the cashew sector is to increase productivity and processing and to improve the livelihood of people,” which informs its decision to sponsor participants to attend the MTP program.

Stop tampering with our transformers, other equipment - ECG to Krobo residents