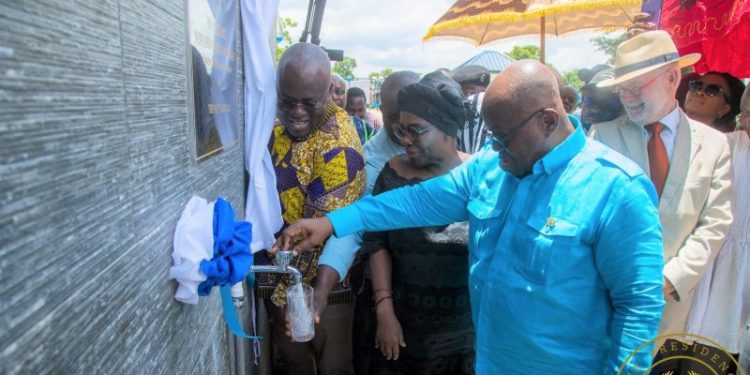 President Nana Addo Dankwa Akufo-Addo has called on residents of the Upper East Region to pay their water bills on time to help maintain water infrastructure in the region.

“Maintaining this new infrastructure means, also, paying your bills on time. Through that, it will ensure the general well-being and health of all the respective communities,” he said.

The President made the call when he commissioned a newly constructed water treatment plant at Tono in the Kassena-Nankana Municipality of the region.

President Akufo-Addo said the project was structured into two phases with the aim to increase the design horizon to make adequate provision for future demand in line with Government’s policy to construct water projects taking into consideration future population growth.

“The execution and completion of the Upper East Water Supply project, falls in line with the programme of Government to achieve a target set under the United Nations Sustainable Development Goal number six of ensuring the availability and sustainable management of water and sanitation for all,” he said.

President Akufo-Addo said the Government was working diligently to provide funds to improve the water supply situation in other parts of the country with the objective to ensure equity and improved quality of life for all communities in the country.

Madam Cecilia Abena Dapaah, the Minister of Water Resources, Works, and Housing, described the project as a welcome initiative, which would prove the water-for-all agenda of the Akufo-Addo-led-government, to ensure universal access to water for all by the year 2030.

Denis Aneakwoa Balinia Adda Asagpaare II, the Paramount Chief of the Navrongo Traditional Area in his address, expressed gratitude to President Akufo-Addo for the water supply system and appealed to him to complete the Navrongo Youth Resource Centre, which he said was a concern to residents.