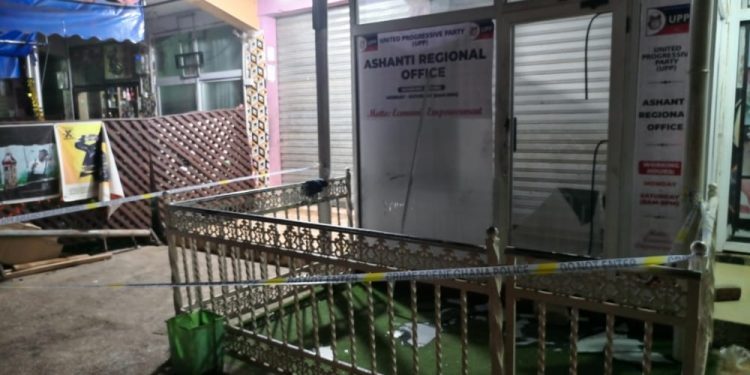 Crime scene officers at the Ashanti Regional Police Command are relying on CCTV footage to find persons who raided the offices of the United Progressive Party.

The offices of Akwasi Addai Odike, the Founder and Leader of the United Progressive Party in the Ashanti Region, were on Monday ransacked and vandalized by some unknown persons.

Citi News cannot independently confirm if the ransacking and vandalism of the offices were linked to some commentaries he made recently on a radio station, which made him incur the wrath of chiefs in the region.

Akwasi Addai Odike in a recent interview on Kumasi-based Oyerepa FM criticised chiefs within the Asante Kingdom for failing to help end illegal mining activities in the region.

He was also accused of threatening to incite the youth to rise against the chiefs if they fail to play their roles in curbing the illegal mining menace.

His comments were, however, described as distasteful and disrespectful by members of the Kumasi Traditional Council.

“The genesis of the whole issue started on 17th August. I was invited to a panel discussion on Oyerepa FM and TV and the topic was galamsey menace and its devastating effect on society. When it got to my turn, I pointed accusing fingers at our chiefs that they have been reluctant to help us fight galamsey. I went further to say that, I suspect that they were behind galamsey and that’s why we are unable to fight the menace.”

“This message didn’t go down well with our chiefs. They organised themselves in the palace and slaughtered a sheep to banish me from the palace. As if that was not enough, they reported me to the police. I went there to write my version of the whole thing. Then they told my chief to banish me from my hometown and freeze my assets there. So this morning [after the ransacking of my office] I went back to the police station to report it.”

He alleged that the men who stormed his office were armed and shot indiscriminately, but he managed to escape.

Crime scene officers from the Ashanti Regional Police Command cordoned off the office while investigations continue.

Mr. Addai Odike is also being given police protection.