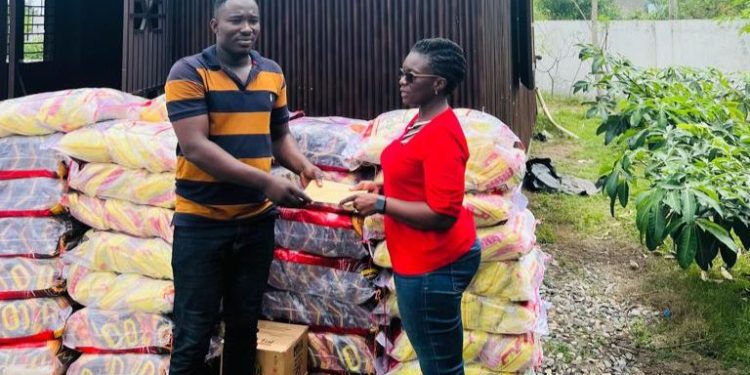 The Ellembelle Food Bank on its 2nd anniversary has received GH¢10,000 and assorted food items from Quantum Terminal Limited.

The Ellembelle Food Bank is a non-partisan social intervention initiative which has since April 2020 fed over 15,000 needy, sick and vulnerable persons in the Ellembelle District and its environs.

The Human Resource Head of Quantum Group, Anastasia Abban, who led the presentation, told Citi News it is their social contribution to improving livelihoods in the Ellembelle District.

Quantum Terminal is the off-taker of Ghana Gas’ LPG.

“As a business entity located in the district, we owe it a moral duty to offer a helping hand to the distressed to make an impact in their lives and the area of our operation. The items included 50 bags of rice, 2 boxes of oil and a cash amount of GH¢10,000”, she said.

Madam Anastasia Abban added that Quantum has been at the heart of the Anokyi community and the Ellembelle enclave providing financial support to brilliant but needy pupils as well as learning materials and will continue to do more.

While thanking Quantum Terminal for the support, the Member of Parliament for Ellembelle, Emmanuel Armah-Kofi Buah who initiated the Ellembelle Food Bank said such donations have kept the Food Bank going.

He called on other institutions to support to enable the Bank to reach out to more vulnerable persons in Ellembelle.