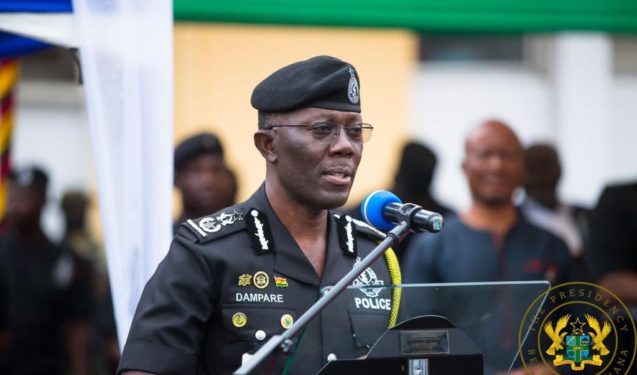 The Inspector General of Police (IGP), Dr. George Akuffo Dampare is in Wa, the Upper West regional capital, following the killing of private security personnel in the area.

He together with some members of the Police Management Board and the Upper West Regional Police Command also paid a courtesy call on the Overlord of the Wa Traditional Area, Wa Naa Seidu Fuseini Pelpuo IV.

Earlier, the IGP and some members of the Police Management Board and the Regional Police Command embarked on a security tour in the municipality.

First to arrive in the region was the Interior Minister, Hon. Ambrose Dery who held a closed-door meeting with the regional security.

He was accompanied by members of the security council to the palace of the overlord of the Waala traditional area where he assure the government’s commitment to ensuring peace and security in Wa.

The overlord of the Waala traditional area, Naa Fuseini Seidu Pelpuo expressed satisfaction about government’s steps so far to restore peace in the Wa township.

The maiden visit of the IGP to the area is to update the service on the new security measures put in place to bring peace in Wa and the Upper West region at large.

So far 10 private security men have been killed by unknown assailants in Wa within the last nine months with the latest incident happening last Friday.

This angered youth in the area, who protested the incessant killings.

The Minister for the Interior, Ambrose Dery however has been meeting with leaders of the Waala traditional area and has assured of thorough investigations into the matter.