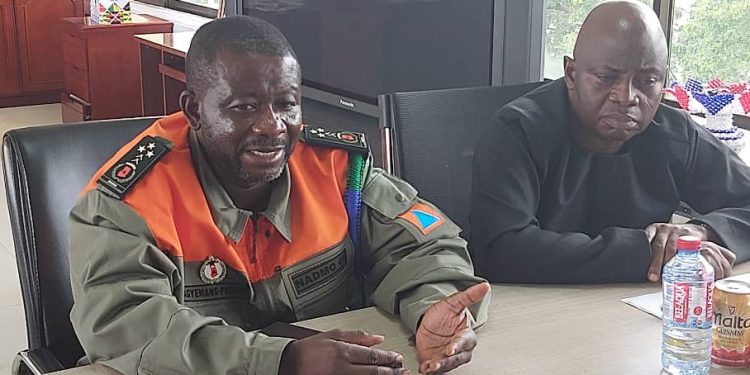 The Director General of the National Disaster Management Organisation (NADMO), Eric Nana Agyemang-Prempeh, says, NADMO has deployed a rescue team along the White Volta to avert any loss of lives resulting from the spillage of the Bagre dam from neighbouring Burkina-Faso.

The annual spillage of the Bagre dam is to prevent the dam’s banks from breakage, but the exercise results in flooding, destruction to crops, livestock and sometimes loss of lives.

Speaking to Citi News, during an impact assessment of spillage in Galaka, Agyemang-Prempeh said, his outfit is well-prepared to contain the situation with the deployment of the rescue team.

“We (Rescue team) are based in Walewale with our equipment and our men who have the technical know-how to report to the rescue mission. We have also written officially to the Ghana Armed Forces and the Inspector General of Police for the 48 engineers regiment and the marine police to support us when the need arises.”

Mr. Agyemang-Prempeh assured residents along the White Volta of their safety and advised them to move to higher grounds and exercise caution.

“Very soon, we are expecting the water. The rate, speed and amount of water coming won’t be easy. The only thing is that we can pray to God that no matter how it happens we will be able to respond as a nation and until the Pwalugu Multipurpose dam is done, I think we are going to live with this for some time.”

“We pray that God grants Ghana government the money, to finish with the Pwalugu dam, then we will be saved from this ritual situation. Until that is done, we should always be prepared that this situation will always come, and we will forever be ready to resolve it.”

He later visited the confluence of the Bagre and Kompeliga tributary at Galaka in the Bawku West District.

Some farmers along the White Volta are still risking their lives to harvest their farm produce prematurely.

They say life will be unbearable without any foodstuff.

Ghanaians in SA cautioned over imminent protests against foreigners