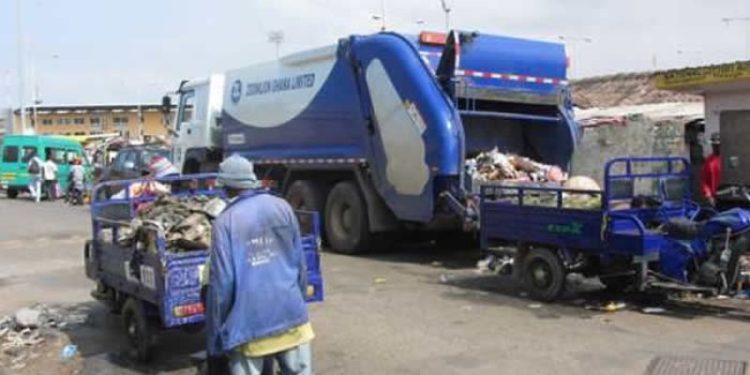 The Trades Union Congress (TUC) has bemoaned the low remuneration of informal waste collectors in the country.

The TUC says in as much as the waste collectors work long hours irrespective of the risk involved, they earn below the minimum wage.

Speaking at an Inclusive Climate Action Programme Conference on Social Dialogue, the Director of Research and Policy at the Trades Union Congress, Dr. Kwabena Nyarko called for immediate reforms to address what he describes as an unlawful situation.

“Ironically, the informal workers who are in the trenches collecting the waste, sorting them thereby creating the millions are so poorly paid. A significant number of these workers earn below the minimum wage. They work long hours in an unhealthy environment without the appropriate protective clothing. Most of them are not on SSNIT and are denied the basic rights in our laws”, he said.

Recently, some labourers at the Accra Metropolitan Assembly (AMA) protested over their unpaid salaries.

The workers who keep the Central Business District clean gathered at the premises of the AMA to agitate.

They brought with them bottles of schnapps and eggs to invoke curses on the authorities for the delay in payment.

According to the workers, they earn as little as GH¢200 a month, but the Assembly hasn’t paid them for almost a year now.

Numbering about 120, the workers said life has been unbearable due to the Assembly’s failure to honour its side of the bargain.

Students at UENR urged to embrace entrepreneurship and savings

Students at UENR urged to embrace entrepreneurship and savings