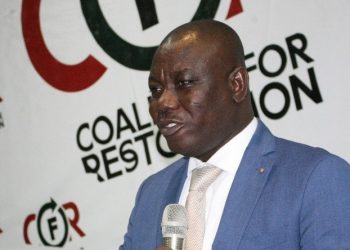 Isaac Adongo, a member on Parliament’s Finance Committee, is pleased with some New Patriotic Party Members of Parliament who have called for the dismissal of Finance Minister, Ken Ofori-Atta and Minister of State at the Ministry, Charles Adu Boahen.

Reacting to the news, the Bolgatanga Central MP said, “this is long overdue.”

The Bolgatanga Central legislator further stated that he believes Mark Assibey-Yeboah, a former Member of Parliament for the Juaben South Constituency, is a better option for the Finance Ministry.

“Ken was never in competition when it comes to competence. Everyone knows Mark Asibi-Yeboah is an excellent brain. He has no business interest. Why such a person is sitting at home, beats my imagination.”

Support our moves to have Ofori-Atta removed – Minority to Majority