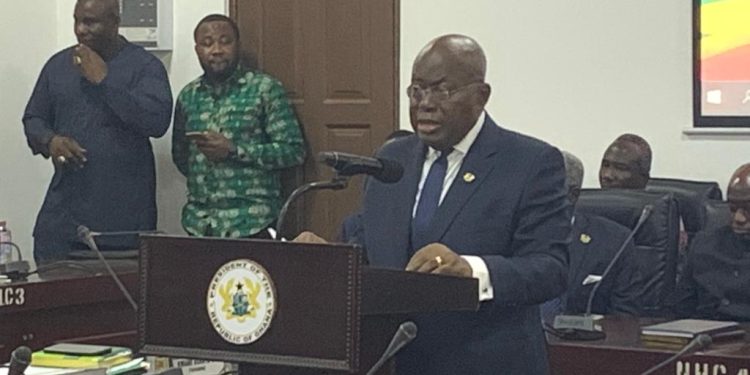 President Nana Addo Dankwa Akufo-Addo believes the fight against illegal mining, popularly known as galamsey can be won if it is not politicized.

He holds the view that until the menace is treated with a nationalistic approach, the fight against it cannot be won.

Speaking at a meeting with the National House of Chiefs, the President bemoaned how all efforts to fight galamsey have failed.

“It is obvious that, if we are to win the fight, you and l have to take the lead to collaborate closely to do so. That is why I am here today. After our meeting, I will also be meeting with the other half of the local government [institutions]-the Metropolitan, Municipal, and District Chief Executives in the ninety metropolitan, municipal, and district areas across the country, where mining activities take place, to seek their active collaboration.”

He also called on the chiefs to support government’s effort in dealing with the menace.

“There are many requests I intend to make of you in the close-door session of our meeting, but one of the most significant, which I have to state now, is to seek your assistance to take partisan political interests out of the fight against galamsey.”

“It can only succeed if it is a truly national battle, which no one seeks to exploit for political gain, as we saw in the last election.”