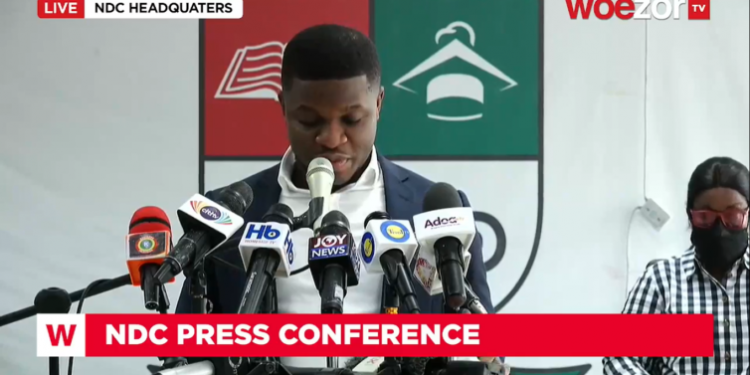 The National Democratic Congress (NDC) says the Akufo-Addo government has failed woefully in the fight against illegal mining (galamsey).

The party describes the measures and strategies put in place by government to fight galamsey as a clear deception.

Speaking at a press conference at the NDC headquarters in Accra, National Communications Officer for NDC, Sammy Gyamfi alleged that some members of the NPP and government are behind galamsey in the country.

“The so-called fight against galamsey by the Akufo-Addo/Bawumia/NPP government is a scam and has been a lost battle from day one. This is because, there has never been any genuine commitment or political will on the part of the President to combat the menace.”

Sammy Gyamfi at the press conference further slammed the president and the Minister of Lands and Natural Resource, Samuel Abu Jinapor over the galamsey menace and accused them of “shifting the blame to the chieftaincy institution.”

“This latest attempt by the Akufo-Addo government to blame the failed “galamsey” fight on chiefs and community leaders is shameful, to say the least and must be condemned in no uncertain terms.”

“It is about time President Akufo-Addo understood the important duties of the high office he currently occupies. He is the President of the Republic and the Commander-in-Chief of the Ghana Armed forces. As President, he has authority and control over the security services and coercive powers of State.”

“The mineral resources of the country are vested in him in trust for the people. And therefore he has the ultimate responsibility to ensure compliance with the mineral and mining laws of the country and the prosecution of those who breach same. More importantly, only he has the power to hire and fire appointees of his who engage in illegal mining. No attempt to shift or share the blame for his failed “Galamsey” fight will wash.”