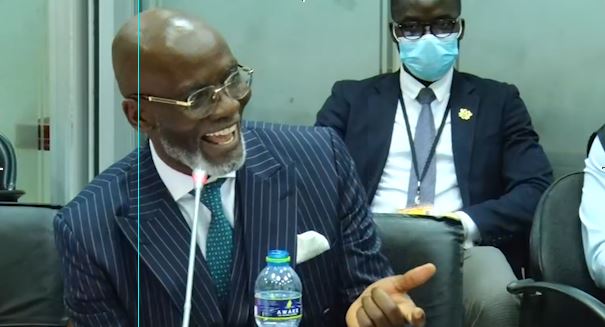 Gabby Asare Otchere-Darko, counsel for Finance Minister, Ken Ofori-Atta, in the parliamentary public hearing of a vote of censure against the Minister, has challenged the authority of the ad-hoc committee probing allegations of conflict of interest against his client.

The Speaker of Parliament, Alban Bagbin set up an eight-member ad-hoc committee to probe claims of conflict of interest, financial recklessness, gross mismanagement of the economy among others as the basis for a censure motion against the Finance Minister by the Minority in Parliament.

Speaking at the committee sitting on Tuesday, Gabby Otchere-Darko, also a private legal practitioner and a leading member of the New Patriotic Party (NPP) said such a probe is the mandate of the Commission on Human Rights and Administrative Justice (CHRAJ).

“Our issue is that, if you go to Article 284 of the Constitution, it says that, a public officer shall not put himself in a position where his personal interest conflicts or is likely to conflict with the function of his office.”

“If you combine that with Article 287 which says an allegation which contravenes or not complied with this chapter shall be made to CHRAJ. The relevant part is that, when a public officer is to face a charge or allegation or any ground of conflict of interest, it is CHRAJ that the constitution says must deal with it”, Gabby added.

Defending the jurisdictional powers and mandate of the ad-hoc committee, Minority Leader, Haruna Iddrisu said counsel for the Minister was conflicting with the hearing and enquiring mandate of such ad-hoc committees because his understanding of Article 287 differs from what the counsel inferred.

“This Committee is not only to hear [the allegations], it also has the power to do a further inquiry into all Government borrowing; who got what, when, and how? All the domestic bonds we have done, for instance, the Euro Bond, who got what? We must be interested in whether our inquiry, engendered a conflict of interest or not.”

Meanwhile, the beleaguered Finance Minister, Ken Ofori-Atta, will on Friday be expected to put up a defence to the Minority’s push for a vote of censure against him.

This follows the conclusion of the first public hearing by the eight-member ad-hoc committee sitting on the matter on Tuesday, amidst heated exchanges, objections and concerns over the admissibility of evidence.

The Minister in a written request, prior to the hearing, sought further and better particulars on the grounds for the motion while raising questions over the committee’s jurisdiction.

Counsel for the under-fire Minister, Gabby Asare Otchere-Darko told the Committee that his client will be ready with the responses by Friday, November 18, 2022.

“We will require about 48 hours which should mean that, we are looking at Friday. We believe that, the Finance Minister, who will speak for himself, will need just one day to make his submissions.”