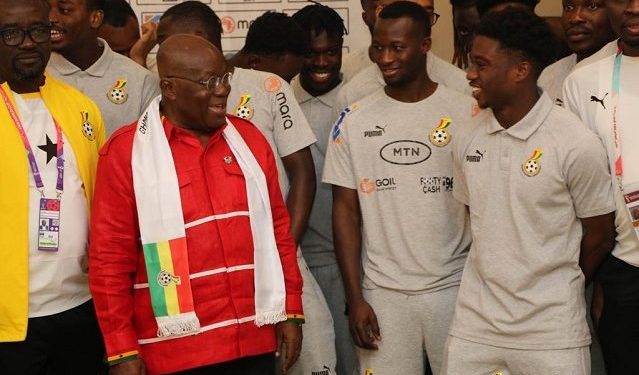 The Minority Leader in Parliament, Haruna Iddrisu, has described the President’s visit to the Black Stars in Qatar as the best motivation offered to the players.

President Akufo Addo paid a visit to the National Football Team in Qatar ahead of their game with Portugal, which has been criticised by some Ghanaians.

But in a statement on the floor of Parliament, a day after the 3-2 defeat of the team by Portugal, the Minority Leader said the gesture by President Akufo-Addo was encouraging and showed the love of the country to the players.

“It was encouraging the president in camp with our players, that is that best motivation they could get,” Mr Haruna Iddrisu said on Friday.

Portugal beat Ghana 3-2 in their World Cup opener, with Ronaldo netting from the spot after going down under a challenge from Mohammed Salisu.

Many viewers disagreed with the decision, thinking Salisu got the ball and that Ronaldo went down easily.

“The defender clearly plays the ball,” former Premier League referee Mike Dean said after the game adding, ‘Ronaldo then touches the back of the defender, goes down, instigated contact.

“It’s not the referee’s fault – he’s given the decision on the field of play. The VAR, in my opinion, should have got involved and invited the referee over to have a look at it.”

He added: “It’s scary, I have to say. I’m just astounded. I like to back referees all the time but you can’t support stuff like that. You can’t defend the indefensible.”