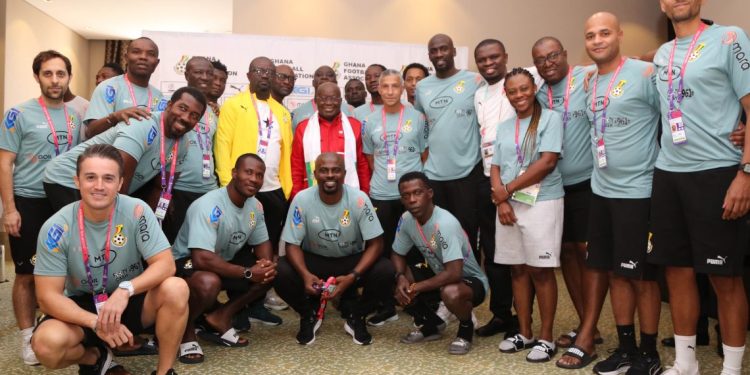 President Nana Addo Dankwa Akufo-Addo has assured Black Stars players of continuous support from Ghanaians despite the 3-2 defeat to Portugal during the opening game at the ongoing 2023 World Cup in Qatar.

Nana Akufo-Addo says Ghanaians are optimistic the Black Stars will win the remaining matches to qualify to the next stage of the competition.

“I know that you are more than capable of going forward, coming out of this competition very well. Fortunately for you, I came here to express the solidarity of the people of Ghana for you and to encourage you. I know you are going to make all of us very proud”, he told the team.

Earlier in a tweet, the President praised the Black Stars for an impressive performance against Portugal.

The Black Stars were on the wrong side of a 3-2 loss on Thursday, but a strong second-half performance saw them almost snatch a draw late on.

A penalty from Cristiano Ronaldo was cancelled out by Andre Ayew’s strike.

Goals from Joao Felix and Rafael Leao appeared to have sealed the game for Portugal, but they had to endure a nerve-wracking end to the game after Osman Bukari headed in a cross for Ghana.

In a tweet after the game, Nana Akufo-Addo praised the team for their performance, which he said proved that they could compete with any side at the World Cup.

“Gutsy performance by the Black Stars in today’s match against Portugal. Very proud of the entire team,” the President said.

“They live to fight another day, & have shown they have what it takes to mix it up against any team in the tournament. Looking forward to the next game against South Korea.”

Gutsy performance by the @GhanaBlackstars in today’s match against Portugal. Very proud of the entire team. They live to fight another day, & have shown they have what it takes to mix it up against any team in the tournament. Looking forward to the next game against South Korea. pic.twitter.com/FiDWm5fO4b

Prior to the game, Nana Akufo-Addo visited the team at their hotel and offered words of encouragement to the players.

Ghana will now face South Korea on Monday before taking on Uruguay in their final group game.

PFJ market to be opened twice a week in Ashanti Region